Snowy Mount Diablo
Unified login: ShakataGaNai is the unique login of this user for all public Wikimedia projects.

Hi, I'm ShakataGaNai [1] (Originally from Shikata ga nai). You can find my everyday blog @ Snowulf.com, but here's a brief run down: I've been involved with Wiki's for many years now. I signed up for the English Wikipedia in April of 2004. In November of 2007 I signed up here on Commons. As of March 2008 I've switched my "home" from En.WP to Commons here. The community decided to reward all my hard work, on June 4th, 2008 by promoting me to Administrator. I fancy myself fairly knowledgeable about how things work, and I've really been working on Deletion Requests. That being said, I'm not perfect. If I do something wrong, please tell me what I did wrong and how I should have done things - I'm not shy of advice or constructive criticism. I'll happily fix my own mistakes too. 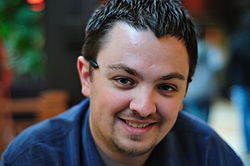 With the extra time on my hands I contribute to Commons as an Administrator and take pictures.

Photography is a hobby of mine. I enjoy making "projects" to go out on my free time and take pictures for English Wikipedia articles that are missing pictures. Occasionally I find old archive photo's that may also do the trick. While many of these pictures may be experimental in nature (and generally not the best picture in the world) they are better than nothing. I also try to make sure that all my pictures get a category added (even if it is overly generic) and GeoCodded (where applicable).

As previously noted, I gladly take questions/requests/comments/constructive criticisms/feedback/etc. You can write to me on my talk page, you can email me or find me on irc.freenode.net as ShakataGaNai.

If you know of an article lacking pictures that is located in the SF Bay Area or Lake Tahoe, feel free to let me know. With that, if you know something about the item (An address, a feature worth a picture, best time of the day, etc), please add that to your note - otherwise you may end up with more generic pictures.

Please direct any insulting and negative commentary to /dev/null

I have recently upgraded my main shooter to a Nikon D300s, my old pictures are mainly done with my D70. Occasionally I steal a Canon PowerShot SD950 and use that.

For a complete listing of all my uploaded pictures: Category:Media by ShakataGaNai

Below is some of my favorites and award badges. [2]

I wrote a batch uploader in PHP called phpmwupper. As of this writing, it's very pre-alpha but it should work.

I haven't bothered update this section in a long time, but I might as well now. WMF had a booth at Maker Faire again (Which I was in charge of, don't know how that happened). Spent my free time running around taking pictures of most of the booths and random stuff about the faire. Will be put into Category:Maker Faire 2009.

I've been threatening to take pictures of BART for a while. I've finally got out and started to do it. So of last count, about 35 images we uploaded from 2008-07-20. I've documented now 4 BART stations with plans to do more. The ones I've covered are: Pittsburg/Bay Point, North Concord, Concord and Pleasant Hill. There were some other misc pictures that got tossed into other BART categories. Hopefully soon though I'll have more station categories.

On 2008-07-27 I nearly got arrested by the Orinda Station Agent, so this project will be put on hold for a while. I still have pictures to upload though.

I went to en:Maker Faire 2008 because I volunteered to help at the WMF booth. It was a ton of fun. Of course being a commons user I had to take pictures. LOTS OF PICTURES. I tried to take a picture of every booth. There were over 500 booths - thankfully I missed some - unfortunately others I took more than one picture.

At this time I've completed my upload. About 300 pictures were upload of the 531 I took. My biggest batch was about 280 pictures, of which all had the same generic description. If you have time, feel free to check out the images in Category:Maker Faire 2008 and add proper descriptions and categories where applicable. Thanks!

RCC 2008 was good! 65 pictures were uploaded from the event itself. See Category:RecentChangesCamp 2008. Additionally I did a shoot with a fellow commoner who demo'd some Tai chi chuan (33 uploaded). See Category:Tai Chi Chuan Demo. I also did a little research on Commons to present at RCC. Of course the outline is here. Feel free to skim it: Presentation on Commons @ RCC 2008

I made the mistake recently of identifying some Wikipedians in pictures I had taken. I did not realize that there was a new "best practice" about self-identification only. While I respect others wishes to not be ID'd, I wanted to make it known that others can identify me openly. So I created a series of group boxes that can be placed on your userpage to quickly alert others to your ID status - only if you want - of course. Here they are: