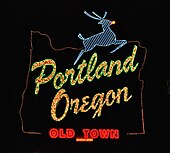 The White Stag sign, a popular landmark in Portland

I am Steve Morgan and I live in Portland, Oregon, U.S. Most of my Wikimedia contributions are editing of English Wikipedia, under a similar user name. I upload photos mainly to support articles. Most were taken by me, but sometimes I also upload photos taken by other people from Flickr, when they have been appropriately licensed for uploading to Wikimedia Commons and illustrate a subject not already illustrated (or not illustrated well) on Commons and which would be difficult or impossible for me to photograph myself. Photos by me that are dated between June 2007 and May 2015 were taken with a Nikon D80, and after that a Nikon D7000. Ones with pre-2007 dates are digital scans of slides.

The photo at left was taken by me, and a small sample of the many other self-taken photos I have uploaded to Commons appears below.