Shown in the conformal ('stereographic') disc model. In each, the origin is equidistant from the three defining mirrors.

Ranked by the area of the fundamental triangle.

You will notice that many of the duals are missing; because, where an odd number of facets meet at a vertex, I have not thought of an algorithm to color them. (The black-and-white figures are made by counting mirror-flips from the pixel to the interior of the triangle that contains the centre.)

In my opinion the above six rows abundantly illustrate the principles; but, by popular demand, I made a hundred more. (And it appears that each row now has at least one article in Wikipedia. I lament my role as enabler.) 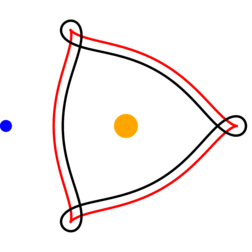 Orbits of two idealized asteroids of the Hilda family, in the rotating reference frame of Jupiter.