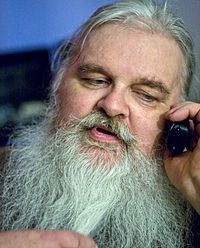 Tom Ordelman (Wiki-nick: Thor NL) was born in the Dutch village of Rheden on October 13, 1957. Currently he lives in Arnhem. He studied Dutch and Arabic language and literature at the Catholic University of Nijmegen (now: Radboud University Nijmegen) and since then sustains his livelihood with the revenues of his writing. Besides for his own, original work, he is also known for quite a number of translations, both from as well as into the Dutch language, among which there is a large number of short stories by H.G. Wells, as well as the last book he published (1945) before his death in 1946, entitled "Mind at the End of Its Tether" From December 1, 1977 until the middle of 2000 he was married to Rose Dicker, with whom he has a daughter, Charly, since July 8, 1978. Charly has meanwhile established her independence as a successful painter and printmaker in the city of Utrecht.