From Wikimedia Commons, the free media repository
Jump to navigation Jump to search
I respond to messages left on this talk page here, not on the talk pages of the users who left them.

Hello Alchemist. Since you now have 10+ FP promotions, you can now add yourself to Commons:Meet our photographers/People. Congratulations. --The High Fin Sperm Whale 18:16, 24 April 2010 (UTC)Reply[reply]

Hi Warut, Hi King of Element Collection! --> I feel flattered :-) And no problem, I do it gladly and perhaps also for your other samples. A question: do you know me and my simple webside perhaps? Best regards, --Alchemist-hp (talk) 18:07, 5 July 2009 (UTC)Reply[reply]

Yes, I (and probably many other element collectors) know you (not personally though) and your collection web site. Thanks again. Warut (talk) 12:50, 6 July 2009 (UTC)Reply[reply]

Do you have the original source files for this? Since these elements are not really related this grouping I don't think would see much use. Can you upload the individual files? The Oxygen I think might be able to be a FP, sorta in-line with the other gas discharge FP's we have. — raeky (talk | edits) 20:10, 17 July 2010 (UTC)Reply[reply]

And here the new images:

I just wanted to say hello, and to say thank you for your photographs. You have some pretty good talent, and it's not often that an edition of the Signpost gets published where I don't see an image of yours noted for gaining featured status. Your series on the elements is top-notch, and I hope you keep up the good work. Bahamut0013 (talk) 12:32, 6 January 2011 (UTC)Reply[reply]

Do you still have access to the sample? If yes, could you take a snapshot from a larger distance, showing the entire ampoule? Nergaal (talk) 17:08, 30 March 2011 (UTC)Reply[reply]

Hi Nergaal, yes I have this sample. I also can take a snapshot and include it perhaps to the main image on the right down. What do you think? --Alchemist-hp (talk) 21:09, 30 March 2011 (UTC)Reply[reply]

What do you think about blue color of this image? Molecular deuterium continuum? Water (D2O)? Materialscientist (talk) 09:20, 20 May 2011 (UTC)Reply[reply]

Hi Materialscientist, it looks for me a bit incorrectly processed. Please compare with my photo. --Alchemist-hp (talk) 20:42, 20 May 2011 (UTC)Reply[reply]

I know your photo, and it shows the red component, which is what we should see from deuterium. It seems too weak to me in the top photo, and thus I suspect that all gas photos by that author are contaminated. He is not a scientist - he keeps too many fake or poorly sourced images on his page [1] (he often admits he doesn't know what is shown in some image, but he might not understand some common mistakes). Materialscientist (talk) 02:43, 21 May 2011 (UTC)Reply[reply]

Your picture Lake Bondhus Norway 2862.jpg will be likely our POTY this year, and i was creating the credits (Commons:Picture_of_the_Year/2011/Credit/Lake_Bondhus_Norway_2862.jpg) and inserted the copyright name in the site you link in your picture as your name. If that isn't your name, or if you don't want it to show (since is the winner will be spread over the internet like wildfire) please feel free to change it.

Congratulations, as 99of9 it's well deserved the picture is awesome, and your work here on commons is of very high quality. Bravo! --PierreSelim (talk) 07:58, 27 June 2012 (UTC)Reply[reply]

Many, many congratulations ! Bravo, Bravo and Bravo again ! Now you know you can take pictures of other things than chemical elements !!!!

I've used a number of them, mostly metals and minerals, at the English WP -- but had no idea you had contributed so many -- and that so many have been honored as FPs (etc.)

So -- belated thanks, and congratulations, on so many fine ccontributions! Cheers, Pete Tillman (talk) 17:50, 8 November 2012 (UTC), economic geologistReply[reply]

Absolutely amazing work (on quality images)! You deserve to have this specially made cookie while you read this. :) Rehman 13:00, 6 November 2013 (UTC)Reply[reply]

Hello. I would like to inform you that I have granted you editor flag at the Arabic Wikipedia, all your edits there will be automatically marked as patrolled. Best regards.--Avocato (talk) 06:57, 6 December 2013 (UTC)Reply[reply]

File:Insect flights in the night in front of a spotlight HP L7869.jpg[edit]

Fascinating picture. I had heard that moths fly in a spiral towards a target (see this page). There's an excellent example at the bottom. Some of the other wiggles seem more random. I wonder if this is to avoid being eaten in flight - hard to predict where they will be. Both pictures are interesting but perhaps the longer one is better. The drawback of nominating both is that you might divide the vote between both pictures and so neither does as well as one might. -- Colin (talk) 10:55, 3 April 2016 (UTC)Reply[reply] 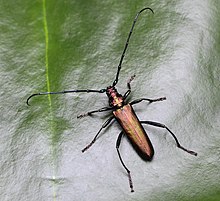 I am fighting a motorway across a wetland site in Wales. This is the only place I have seen Aromia moschata - in the old willows. I am using this on my twitter and facebook accounts (@julianbrans on Twitter, and Julian Branscombe on Facebook) to encourage people to object to the Welsh Government. Thank you very much for your help by sharing this absolutely wonderful photograph of a fantastic beetle. Danke schon! Julian

Hi, Alchemist. I like this photo. It's not a super-zoomed photo of a single bird, but it shows the birds in their habitat, and I like the shapes of the tree branches as well as those of the vultures and consider this a very good composition. If you nominate this for FP, I'll support it, for whatever that's worth. -- Ikan Kekek (talk) 02:53, 31 May 2016 (UTC)Reply[reply]

So, as I am new to the concept of correcting CA, perhaps you might help here. I shoot this in RAW, and can make the original available, or if you care on elaborating on the specific variables in the lens profile correction tool for CA that you think it needs more of. LMK if you care to have me send you the original and give it a go yourself. Thank you! --WPPilot (talk) 21:24, 5 November 2016 (UTC)Reply[reply]

@WPPilot sorry, but I can't help you. In only can correct the CAs from images taken by a Canon camera + lenses. I know, it is possible do correct it with the NIK-Tools or Photoshop Lightroom. Perhaps the The Photographer can help you?! --Alchemist-hp (talk) 22:14, 5 November 2016 (UTC)Reply[reply]

Since 1959, it is a Swedish tradition to (at 3 pm) watch Donald Duck and other Disney cartoons on TV. The most appreciated part is about Donald as bird photographer in Clown of the Jungle. I think most users at FPC can relate to the frustrated Donald (especially the parrot scene), which is why I'm sharing it with you. Happy Holiday!

Hi, I am using some of your lanthanide images for a research poster I am presenting at a conference. I'd like to use thulium, Scandium, lutetium, and Eu-block. I am planning on modifying them a little (removing background). I will include credit to you.

Thank you, the images are lovely.

My name is Julian Gieseler, I'm a student at TU Berlin, Germany. I would like to use your fantastic fotograph "Bromine vial in acrylic cube.jpg" (https://en.wikipedia.org/wiki/File:Bromine_vial_in_acrylic_cube.jpg) as an illustration of transparent and semitransparent materials in a presentation slide. Proper credits will be given.

Hello, the identification of the subject of this photo is questioned in this page. If you have some knowledge that can help us, you are very welcome. Sorry for the inconvenience and thank you. Regards, Christian Ferrer (talk) 08:55, 1 July 2018 (UTC)Reply[reply]

A community discussion has been closed where the consensus was to grant all file movers the suppressredirect user right. This will allow file movers to not leave behind a redirect when moving files and instead automatically have the original file name deleted. Policy never requires you to suppress the redirect, suppression of redirects is entirely optional.

Possible acceptable uses of this ability:

Please note, this ability should be used only in certain circumstances and only if you are absolutely sure that it is not going to break the display of the file on any project. Redirects should never be suppressed if the file is in use on any project. When in doubt, leave a redirect. If you forget to suppress the redirect in case of file name vandalism or you are not fully certain if the original file name is actually vandalism, leave a redirect and tag the redirect for speedy deletion per G2.

The malicious or reckless breaking of file links via the suppressredirect user right is considered an abuse of the file mover right and is grounds for immediate revocation of that right. This message serves as both a notice that you have this right and as an official warning. Questions regarding this right should be directed to administrators. --Majora (talk) 21:35, 7 November 2019 (UTC)Reply[reply]

If you want to take part where WSC2019 is still open, please consult this page. There is also an international upload category with no national prize.

If you are an expert user, please consider that images uploaded within the deadline can be included in any case in the national categories even if not uploaded with the main interface.

Please keep in mind that there is a new category this year, i.e. "nature and wildlife".

If you already took part in a country that has completed its upload phase please consider improving the description in English of your files (click on the edit button), since such description is what the international jury will use to evaluate such files at next step. World finalists will be finalized after March 2020.

Sorry for bothering you and have a nice wiki.

Message discussed here. If you do not want to receive these messages in the future, please unsuscribe from this list

I am using your Zinc photo in one of my college lab course PowerPoints. Thank you! — Preceding unsigned comment added by Pooky333 (talk • contribs) 14:26, 15 April 2020 (UTC)Reply[reply]

This file is dual licensed Free Art License and CC-BY-ND. Would it be possible to also license this photo CC-BY so it can be used for image compression algorithm development and testing? This would allow derivatives with heavy compression artifacts to be used in academic and other image standards publications.

If you want to take part in WSC2021, please consult this page. Only some national categories are associated to competitions with local prizes.

If you are an expert user, we remind you that images uploaded within the deadline can be included in any case in their national category even if not uploaded with the main interface.

Please keep in mind that there is a new category this year, that is "astronomy".

If you already took part in a country that has completed its upload phase, please consider improving the description in English of your files (click on the edit button), since such description is what the international jury will use to evaluate them. World finalists will be finalized after March 2020.

Sorry for bothering you and have a nice wiki.

Message discussed here. If you do not want to receive these messages in the future, please unsubscribe from this list

I have seen your pictures of some of the elements and I really like them! If you have any other high quality images I would love if you could reply with them