You are basically free to use my photo, but I appreciate if you tell me for what purpose, particularly for the Toyota Celica pictures. Do not put fake license plate on my Celica.

Yes, I took the picture in Utrecht, Nederland in the little 'drop-off' point / short stay car park above and on the southside of the rail tracks/platforms at the central rail station.

They've extended the Hoog Katherijne (which I almost certainly spell wrongly) shopping centre over the station since then, and I don't think the car park exists in that form any more. Date? Yes, as far as I can make out from the Japanese entry, production of this version got under way in the Autumn of 1989, so most likely after the summer vacations provided the opportunity to switch dies of the presses and make all the other changes on the production line to accommodate the new shape. So I must have taken the picture in 1989 at the earliest. 1990 would be a reasonable inference. I do remember it was a cold bright winter day (big light: big reflections...) , so March 1990 seems reasonable. I didn't know this notchback version of this Celica was ever sold in Germany. At that time European markets were viewed more individually than today, and both Belgium and Nederland got a wider range of Toyotas than Germany or UK. I guess the idea was that in countries without a significant 'domestic' auto-industry, the newly expanding Japanese should go for the mass market. But in Germany or UK competing against Volkswagen or Ford UK for the volume sales on their home patches in Germany / UK could be less profitable than concentrating on certain niches. Of course it's also cheaper and quicker to set up relatively dense dealer networks in smaller contries like Nederland & Belgium, which were particularly attractive in that respect because of relatively high earning power coupled with a largely urbanized population, so you need fewer larger dealers to cover the territory than you would in Wales or the corn belt states. Incidentally, I don't think this notchback Celica was ever a big seller anywhere in western Europe: its rarity was one of the reasons I would have been motivated to photograph it. I do, however, also have somewhere a picture of one with a Belgian license plate (which I guess is why I'm going on about NL and B in this para. Regards Charles01 (talk) 07:19, 18 December 2009 (UTC)

Hi Charles01, Perhaps someone brought this black Celica 1.6 ST-i notchback from USA. I know someone brought a US spec GT-Four (All-Trac) to Belgium, then he moved to Finland. Another All-Trac was found for sale in Hungary. When I had vacation in Europe, I found US spec Lexus SC400 in France, Tercel in Italy, and Camry LE in Belgium. It's quite common to see US spec cars in Europe. For the 5th gen Celica, UK only got 2.0 GT-i Liftback, GT-Four & GT-Four Carlos Sainz, while in the Continent there were 1.6 ST-i Liftback & 2.0 GT-i Cabriolet. The wide body Liftback 2.0 GTS-i was sold exclusively in NL & B. BTW, where did you take pic of 4th gen Celica notchback?

Not entirely sure which Toyota Celica counts as fourth generation, but if you mean this one I photographed it in Cambridge, England (at the north end of the Trumpington Road, along a little parallel road called, as far as I remember, Brookside) I don't think it's a UK spec model tho, and from what I can see of the wipers it might not even have the steering wheel on the "English" (and indeed Japanese) side of the car. It's true there are a lot of US spec cars that fetch up in Europe, especially where there are US military bases nearby. There are a lot of US military bases near to Cambridge left over from World War II because it was close to Germany which the Brits and their allies were at the time keen to bomb. The bases stayed, primarily because of the threatening stance of the Soviets, and of course the US military personnel almost all had cars which they were often able to purchase (at least by European standards) for fantastically low prices. For Japanese originating cars you also get a lot of 'grey imports' in the UK, because (1) the Japanese used car market generally fixes lower used car prices than the European used car market and (2) the Brits and the Japanese agree that in North America, and in most of Europe, folks all drive on the 'wrong' side of the road. Still, I guess it's the differences that make life interesting as long as we don't all see it as a reason to drop bombs on each other again. Regards Charles01 (talk) 09:35, 19 December 2009 (UTC)

Nice shot of silver 4th gen Subaru Liberty in Cronulla. Could you mention the model grade (example for Celica: SX, ZR, GT-Four) for each cars you pictured? Celica21gtfour, 23 May 2010

Hi, thank you Celica21gtfour. I always try to get the exact model grade where possible, but with the Subaru Liberty models, I find it difficult to do so as the only main difference between the model grades are the wheels used. Even then, different model grades use the same wheel design. OSX (talk • contributions) 23:08, 23 May 2010 (UTC)

Nice shot of a nice car. Not so common these days to find white ST204 in stock and good condition. Do you know why it has black license plate? What does it mean, how about white or yellow plate? Do you live in Sutherland Shire area? Celica21gtfour 8 July 2010.

The black license plate is one of several styles offered in New South Wales. I believe that combination is an extra-cost option; they are usually personalised when configured in that style. The yellow plates are the standard ones, and the white ones (known as "premium" plates) are a bit extra. And yes, I am form the Sutherland Shire area. OSX (talk • contributions) 05:39, 8 July 2010 (UTC) 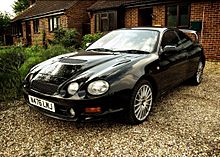 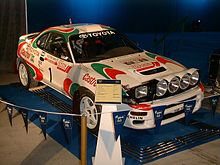 Photos of Proton cars in Indonesia[edit]

Hi Celica21gtfour, nice to meet you ! Lately I've taken a great interest in photography, Wikimedia Commons and Flickr. I recently came across your collection of car photos, and I must say that it is one of the best, if not THE best Indonesian car collection on Wikimedia Commons. Great work man !

I'm gonna incorporate some of your photos into their respective Wikipedia articles, if they aren't already. I wish there were more Wikipedia/Wikimedia contributors like you man. Very few people in ASEAN want to help contribute to Wikipedia... it's very disheartening. :(

If it's not too much to ask, would it be possible if you could photograph some Proton cars in Indonesia too ? I understand that they're rare in Indonesia, and if it's not possible or too much trouble, no worries, I won't bug or trouble you hereafter.

Hi Celica21gtfour,
I am so sorry for taking 5 months to reply to your post on my talk page ! I remember reading it last year, but I somehow forgot to reply and thank you ! I hope there are no hard feelings ! I sincerely apologize for my lack of manners and punctuality. :x
Thanks for considering my request ! I will try to find some Indonesian cars in Malaysia like the Avanza, Kijang Innova, Fortuner, Freed etc.
Thanks again,
Aero777 (talk) 16:13, 26 April 2014 (UTC)

Can you upload some pictures of new cars in Indonesia: