I mostly concern myself with Oriental numismatic affairs.

This is a Wikimedia Commons user talk page.

This is not an article, file or the talk page of an article or file. If you find this page on any site other than the Wikimedia Commons you are viewing a mirror site. Be aware that the page may be outdated and that the user to whom this talk page belongs may have no personal affiliation with any site other than the Wikimedia Commons itself. The original page is located at https://commons.wikimedia.org/wiki/User_talk:Donald_Trung.

This is the user talk page of Donald Trung, where you can send messages and comments to Donald Trung.

Here's your quick overview of what has been happening around Wikidata over the last week.

You can see all open tickets related to Wikidata here. If you want to help, you can also have a look at the tasks needing a volunteer.

Latest tech news from the Wikimedia technical community. Please tell other users about these changes. Not all changes will affect you. Translations are available.

Tech news prepared by Tech News writers and posted by bot • Contribute • Translate • Get help • Give feedback • Subscribe or unsubscribe.

This Month in Education: June 2020[edit]

Here's your quick overview of what has been happening around Wikidata over the last week.

You can see all open tickets related to Wikidata here. If you want to help, you can also have a look at the tasks needing a volunteer.

Latest tech news from the Wikimedia technical community. Please tell other users about these changes. Not all changes will affect you. Translations are available.

Tech news prepared by Tech News writers and posted by bot • Contribute • Translate • Get help • Give feedback • Subscribe or unsubscribe.

Article of the Month

Operation Bernhard was an exercise by Nazi Germany to forge British bank notes. The initial plan was to drop the notes over Britain to bring about a collapse of the British economy during the Second World War. The first phase was run from early 1940 by the
Sicherheitsdienst
(SD) under the title
Unternehmen Andreas
(Operation Andreas, Operation Andrew). The unit successfully duplicated the rag paper used by the British, produced near-identical engraving blocks and deduced the algorithm used to create the alpha-numeric serial code on each note. The unit closed in early 1942 after its head, Alfred Naujocks, fell out of favour with his superior officer, Reinhard Heydrich.

The operation was revived later in the year; the aim was changed to forging money to finance German intelligence operations. Instead of a specialist unit within the SD, prisoners from Nazi concentration camps were selected and sent to Sachsenhausen concentration camp to work under SS Major Bernhard Krüger. The unit produced British notes until mid-1945; estimates vary of the number and value of notes printed, from £132.6 million up to £300 million. By the time the unit ceased production, they had perfected the artwork for US dollars, although the paper and serial numbers were still being analysed. The counterfeit money was laundered in exchange for money and other assets. Counterfeit notes from the operation were used to pay the Turkish agent Elyesa Bazna—code named Cicero—for his work in obtaining British secrets from the British ambassador in Ankara, and £100,000 from Operation Bernhard was used to obtain information that helped to free the Italian leader Benito Mussolini in the Gran Sasso raid in September 1943.

In early 1945 the unit was moved to Mauthausen-Gusen concentration camp in Austria, then to the Redl-Zipf series of tunnels and finally to Ebensee concentration camp. Because of an overly precise interpretation of a German order, the prisoners were not executed on their arrival; they were liberated shortly afterwards by the American Army. Much of the output of the unit was dumped into the Toplitz and Grundlsee lakes at the end of the war, but enough went into general circulation that the Bank of England stopped releasing new notes and issued a new design after the war. The operation has been dramatised in a comedy-drama miniseries Private Schulz by the BBC and in a 2007 film, The Counterfeiters (
Die Fälscher
). Template:TFAFULL
On the Main Page

The Hudson Sesquicentennial half dollar is a fifty-cent piece struck by the United States Bureau of the Mint in 1935 as a commemorative coin. The coin was designed by Chester Beach. Its obverse depicts the Half Moon, flagship of Henry Hudson, after whom the city of Hudson is named. In addition to showing the ship, the coin displays a version of the Hudson city seal, with Neptune riding a whale, a design that has drawn commentary. Although the city of Hudson was a relatively small municipality, legislation to issue a coin in honor of its 150th anniversary went through Congress without opposition and was signed by President Franklin D. Roosevelt, becoming the Act of May 2, 1935. Most of the coins were likely bought by coin dealers, leaving few for collectors, with the result that prices spiked from the $1 cost at the time of issue. This caused collector anger, but did not lower the coin's value, which has continued to increase in the 80-plus years since it was struck. Template:TFAFULL

Picture of the Day April 13

The WikiProject Numismatics newsletter is a monthly newsletter published by WikiProject Numismatics • If you have any questions about the project or numismatics in general, feel free to ask here • Discuss this newsletter here • View previous issues here
New members are automatically added to the subscriber list • If you are not a member and would like to receive this newsletter, or are a member but would not like to receive future issues, you may subscribe/unsubscribe here
Delivered by ZLEA via MediaWiki message delivery (talk) at 20:37, 2 July 2020 (UTC) 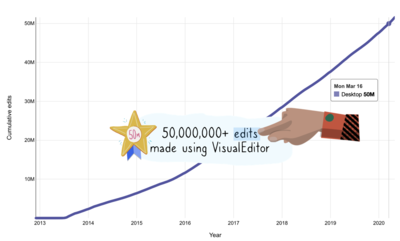 On 16 March 2020, the 50 millionth edit was made using the visual editor on desktop.

Seven years ago this week, the Editing team made the visual editor available by default to all logged-in editors using the desktop site at the English Wikipedia. Here's what happened since its introduction: