I more often contribute to the English version of Wikipedia as user Hayden120. Please inform me of image concerns and deletion notifications on my talk page there, not here. Thanks!

Hello, and RE locator maps[edit]

Hey there. I'm not so much creating totally new maps as I am doing so to make all European articles consistent and, in turn, in-line with the locator maps used for many countries. I hope to create SVG versions at some point soon, but my exports of these are turning out to each be megabytes in size. Anyhow, as requested, I've created a map for Switzerland 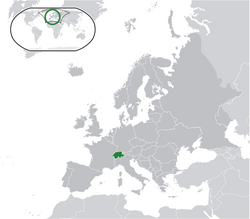 and have placed it in the English article. I've also uploaded a revised one for Finland, with a wider scope as I was using a template with a more limited scope previously (erroneously), but (notably) these new maps include the borders for Kosovo (which is dotted, consistent with other territories whose status is ambiguous). I've also uploaded these maps a few times each, perfecting them as I go. There you go. Thoughts? Bosonic dressing (talk) 09:17, 16 June 2009 (UTC)

The North Caucasian languages aren't Indo-European, except for Ossetian which you did depict. See here Machinarium (talk) 06:50, 21 January 2012 (UTC)

The North Caucasian languages, except for Ossetian, aren't represented as Indo-European. Russian is spoken to a degree throughout this region (along with Kazakhstan, etc.) and that is represented with green dots (dots suggest multilingualism to a noteworthy degree). You may need to fully enlarge the image to see this. This representation is simply based on the source, and the density of the dots is not based on the number of speakers. The map is only approximative. Hayden120 (talk) 04:32, 22 January 2012 (UTC)

Thanks for your reply. The North Caucasian region isn't represented with green dots though, unlike Kazakhstan / Georgia / Kalmykia. Machinarium (talk) 09:46, 22 January 2012 (UTC)

I would say that ethnic group dose not corrispond with luanguge, I think a majarity of ethnic kazaks in kazakhstan actualy speak russian as there main luangeage, In Uzbackistan I know there is a verry large pressence of persian speakers, and a situation where people speak tajik but mark uzbeck down as there nationalility,--J intela (talk) 19:21, 4 March 2012 (UTC)

The developer team at Wikimedia is making some changes to how accounts work, as part of our on-going efforts to provide new and better tools for our users like cross-wiki notifications. These changes will mean you have the same account name everywhere. This will let us give you new features that will help you edit and discuss better, and allow more flexible user permissions for tools. One of the side-effects of this is that user accounts will now have to be unique across all 900 Wikimedia wikis. See the announcement for more information.

Unfortunately, your account clashes with another account also called X360. To make sure that both of you can use all Wikimedia projects in future, we have reserved the name X360~commonswiki that only you will have. If you like it, you don't have to do anything. If you do not like it, you can pick out a different name.

Your account will still work as before, and you will be credited for all your edits made so far, but you will have to use the new account name when you log in.

Sorry for the inconvenience.