Hey thanks! im just a sophmore uni student with a passion for history, and i did these to learn and thought i might as well give them to wiki. Im in exams right now which is why i haven't been doing much, but during the xmas break i'll probably do some more. I have always liked the maps you make, the topographic look gives it a new dimension since you can see where empires stopped and what features stopped them such as mountains and deserts. So yeah my msn is Javierfv121288@hotmail.com so if you want to chat sometime just go ahead and message me.

Hi AnonMoos, thank you for catching my spelling error on those maps! I'll update them soon, not yet sure if I'll use Hsiung-nu or Xiongnu (since Xiongnu is the official Wiki-designation).

For Judea, do you know what the borders should look like? They weren't on my source map and it would help speed along the corrections.

In any case, I'll be updating those maps soon and should have the corrected versions uploaded in about a month. Thank you, and please let me know if you see any other corrections that I should make. Respectfully, Thomas Lessman 02:08, 10 May 2008 (UTC)

Xiongnu is Pinyin (the Latin-alphabet transcription system used in the PRC since the late 1950's), while Hsiung-nu is Wade-Giles (an older transcription system, the one most frequently used outside the PRC until the 1970's). I have several Maccabee maps here on paper (the largest and clearest one probably that in Atlas of the Bible Lands revised edition by Harry Thomas Frank, ISBN 0-8437-7055-4), but I don't know of an online version... AnonMoos 07:43, 10 May 2008 (UTC)

Thanks for uploading Image:Rome-Seleucia-Parthia_200ad.jpg. I notice the image page currently doesn't specify who created the content, so the copyright status is unclear. If you have not created this media yourself then you need to argue that we have the right to use the media on Wikimedia Commons (see copyright tagging below). If you have not created the media yourself then you should also specify where you found it, i.e., in most cases link to the website where you got it, and the terms of use for content from that page. If the content is a derivative of a copyrighted work, you need to supply the names and a licence of the original authors as well.

Note that any unsourced and untagged images will be deleted one week after they have been uploaded, as described on criteria for speedy deletion. If you have uploaded other media, please check that you have specified their source and copyright tagged them, too. You can find all your uploads using the Gallery tool. Thank you. -Nard 00:23, 7 June 2008 (UTC)

Where did You find Albanians near Kaspian sea on that map of Alexander the Great. Even Balkan historians cant say nothing for them, they are among hardest nation to explain...so i wonder, who gave them there ? --Mile (talk) 08:22, 9 December 2008 (UTC)

The Brahmin rulers of ancient Sind are more universally known (expectedly) as "The Brahmin Dynasty". If you need references, will be happy to provide that.

Can you please correct the map accordingly?

Hello, thank you for bringing this to my attention. Honestly, I don't want to change it. However, for the sake of knowledge and clarity, I'll make a compromise with you. I'll add a sub-caption to show that the rulers of Sind were also known as "The Brahmin Dynasty". It will take several months before I can update the appropriate maps. Again, thank you. Thomas Lessman (talk) 12:53, 25 May 2009 (UTC)

File:Roman-Empire 200bc.jpg has written on the map itself "200 A.D." (I know this is a simple typo). As I know you are quite aware by 200 A.D. the Roman Republic had long given way to the Roman Empire.

It seems that west Sicily was under Vandals in 477, and becale enterly Ostrogoth only on 491. Effectively Odoacer tried to conquer Sicily, but with modest results (just keeping territories he already had. West Sicily became ostrogoth in 491 with a marriage of a Vandal princess to a Ostrogoth king. So, as far as I know there is a small error in the map. All the best. --Gmelfi (talk) 15:10, 23 July 2009 (UTC)

I'm looking for some nice atlases with historical maps and charts in it. Do you happen to have any recommendations?

in fact, in 400 AD the Gupta Empire reached the maximum extent and certainly included the basin of the river Indus and the Deccan.

Gupta Empire in 475 AD the Huns suffered the invasion began, and the decay

Really nice Maps, but in File:East-Hem 300ad.jpg the "bosporus" is in the wrong place! It's located at the Krim, but belongs between Turkey and Greece at Istanbul! Thanks!

In the area that is marked with the questionmark, there lies the Warsangali Sultanate, and a litle bit in the north the Ajuuraan Empire. You can replace the questionmark with these two mentioned states. Thank you. Runehelmet (talk) 17:40, 16 February 2012 (UTC)

I'm working to improve an article about chess history and I'm wondering if you have a map that looks like this, without any word, showing this region. Regards, OTAVIO1981 (talk) 12:31, 9 March 2012 (UTC) 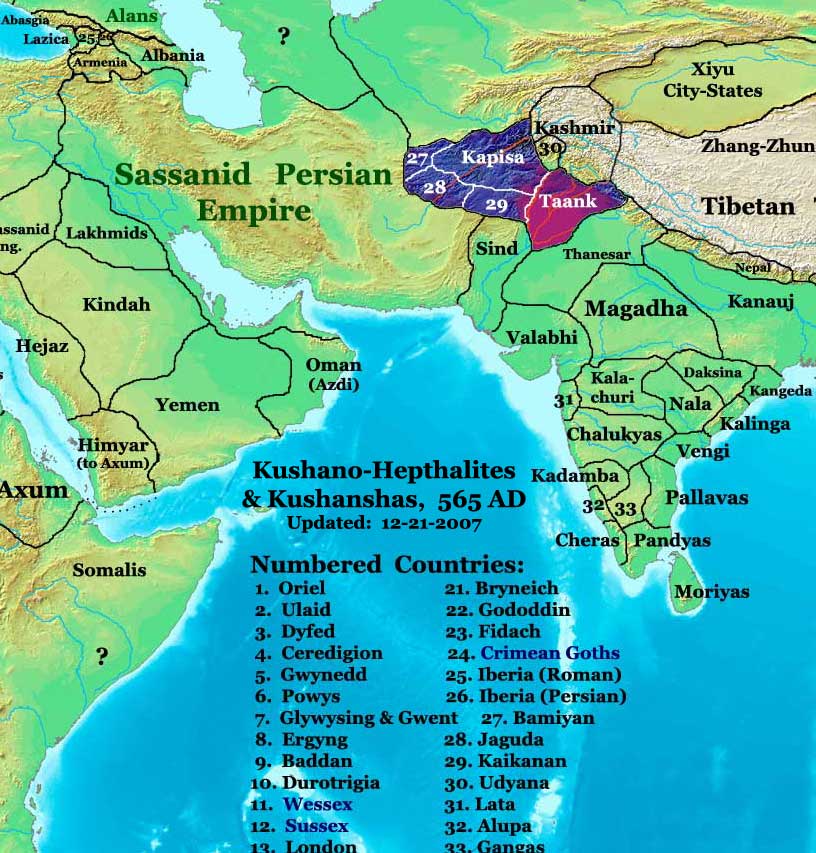 Difference between the borders of the States =[edit]

Hello Talessman! Looking to this map, and this another I saw problems with the boundaries of the States in the Middle East. In the first we can see the Indo-Partha that we don't see in the another, the boudaries of the Cappadocia, Armenia e Pontus are different, and what are the States of number 2, 3, 4, 5, 7, 8, 9 and 10? I think that I now three of them, but I don't know the others, and I think that without any legend in the image it's difficult for the people use the map. Could you check please? Respectfully, --Renato de carvalho ferreira (talk) 03:59, 26 April 2013 (UTC)

The area marked as Swedish territory in the 1200 AD map is too large. There is no evidence that the area of Finland was part of the kingdom of Sweden before 1249 when Swedish earl Birger conquered Finland. The so-called First Swedish Crusade (1155) is presently considered mostly as a legend.

Thank you for your history maps. They are best when expanded and are most useful when one century can be compared to the next. I was thinking of making an article called [*[Old World historical maps]*] or similar with all the maps shown full size in historical sequence. This would be very unorthodox (there are no other articles like it as far as I know), but I think it might work. Since this is your stuff, what do you think? Also, there is a similar series for Mongolian history. Do you know anything about them? Benjamin Trovato (talk) 00:57, 7 February 2017 (UTC)

Hello, really great work with the maps. I just spotted one error on your Eastern Hemisphere 800AD map, which is the labelling the Māori as being in New Zealand at this time. I don't believe they arrived that early. According to the wikipedia article on the history of the Māori people, the settlement of New Zealand was not until 1250-1300AD. Cheers --Helrasincke (talk) 22:31, 1 January 2018 (UTC)

I have noticed two relatively minor errors in your map of the Eastern Hemisphere in 800AD, as seen in the page Turkic migration. The term for the Malagasy peoples in the map is incorrect, as in the map it's "Malagasyans", and as far as I know that term doesn't really get used anymore. But a larger error is that the Maori peoples are shown in New Zealand. New Zealand was actually uninhabited at the time of the map.

A small but consistent error with your maps is that the dates pertaining to the Bantu migration are inaccurate. As can be seen of the Bantu Expansion page, they reached modern day Kwazulu-Natal by around 300 AD at the earliest. Your maps show Khoisan farmers as living in Zimbabwe as late as 1200 AD (merely a century before Great Zimbabwe is formed). Tangent- it is unclear, at least for me, what the "?" in Somalia is supposed to represent. MToumbola (talk) 15:44, 13 February 2019 (UTC)