Hi Wolfymoza, I saw you corrected a number of toponyms in my Greek version of File:Map provinces Netherlands-el.svg. Do you have a source for these corrections (say, an atlas)? Some of your corrections make sense, but others seem rather strange to me. For example, Μάρκεμεερ should be Μάρκερμεερ (Dutch: Markermeer), in my opinion. Kind regards, Wikibelgiaan (talk) 10:56, 6 February 2015 (UTC)

Thanks for the corrections! I still have a couple of remarks: Χάρινγκβλιετ should be Χάρινγκβλιτ, or maybe Χάρινγκφλιτ (since ie is pronounced ι, just as in Φρίσλαντ/Friesland); Ντέλφζιλ should be Ντελφσέιλ or Ντελφσάιλ (with ij/ei as in Άισελ or Λέιντεν); Μπρέντα should be Μπρεντά. The rest of the transcriptions looks okay to me. One final thing: you changed Θάλασσα των Βάντεν (Waddenzee) to Θάλασσα του Βάντεν. I realize that the του-variant is more widely used on the Internet (with the των-variant occurring in an EU legal text, it should be said), but Βάντεν (Dutch Wadden) really is a plural form. The term Βάντεν refers to the islands located in the sea.
And one more thing, which is a general remark about Greek transcriptions of Dutch (and German): the only reason why aa, ee, and oo are written with a double vowel, is because they are pronounced as a long vowel. Therefore, α, ε, ο (or maybe ω) would be a lot closer to the Dutch pronunciation than αα, εε, οο. Of course, one cannot change the general practice, but it has always surprised me.
Kind regards, Wikibelgiaan (talk) 13:55, 11 February 2015 (UTC)

And again thank you for the remarks. Χάρινγκβλιετ changed to Χάρινγκφλιτ, I didn't have anything really for this one, didn't find it on the internet or anywhere. Ντέλφζιλ changed to Ντέλφζεϊλ as per this. Μπρέντα remained as it is, I don't know if Μπρεντά is the right one, but Μπρέντα is the common use in Greek (e.g. Μπρέντα, πόλη της Ολλανδίας -Μπρέντα, city of Holland-, the team, sport's page e.t.c.). Θάλασσα του Βάντεν changed to Θάλασσα των Βάντεν, Θάλασσα Βάντεν would be also exceptable.

As per the pronunciation, modern Greek doesn’t distinguish between long and short vowels as per their pronunciation. In ancient Greek ω would be pronounced as oo. So if you want to pronounce meer you have to write μεερ. Also, in foreign names, Greek language in general simplifies their pronunciation and spelling. Wolfymoza (talk) 08:23, 12 February 2015 (UTC)

Thank you for the changes and the extensive answer. I have to say, my Modern Greek isn't perfect, but I'm trying to learn as much as I can. However, I can read most of it, since I know Ancient Greek quite well (it being my job). Wikibelgiaan (talk) 12:27, 12 February 2015 (UTC)

Hello Wolfymoza. Can you translate

Thank you very much

hello again. Can you translate 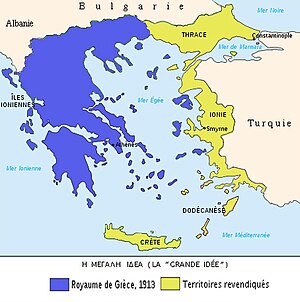 and this picture on greek

The image File:Funeral of Metropolital Bishop Damaskinos 2012.jpg you uploaded contain(s) watermarks. The usage of watermarks is discouraged according to policy. If a non-watermarked version of the image is available, please upload it under the same file name. After removing the watermark, ensure that the removed information is present in the EXIF tags, the image description page, or both. Thank you for understanding.

I also want to ask to recognaze people who stand in Patriarch Batholomew Residence.

What is the name of place (building) where they were? ~ Чръный человек (talk)

What's the location of this painting? Thanks.