Atlanta is a major city in and the capital of Georgia, a state in the Southeast United States.

Location of Atlanta in Georgia

The Atlanta Thrashers are a professional ice hockey team formerly based in Atlanta, Georgia. They play in the National Hockey League (NHL).

Areas of the park[edit] 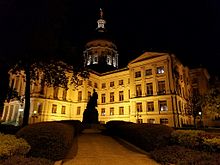