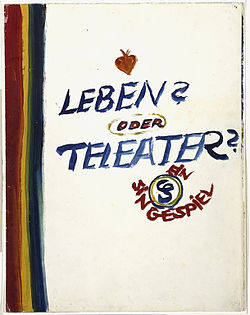 Deutsch: Charlotte Salomon (* 16. April 1917 in Berlin; † 10. Oktober 1943 in Auschwitz) war eine deutsche Malerin.
English: Charlotte Salomon (April 16, 1917 - October 10, 1943) was a German-Jewish artist born in Berlin. She is primarily remembered as the creator of an autobiographical series of paintings Leben? oder Theater?: Ein Singespiel (Life? or Theatre?: A Song-play) consisting of 769 individual works painted between 1941 and 1943 in the south of France, while Salomon was in hiding from the Nazis. In October 1943 she was captured and deported to Auschwitz, where she and her unborn child were gassed to death by her government soon after her arrival.

The bulk of Charlotte Salomon's work was published for the purposes of US law when her estate gifted her work to the Charlotte Salomon Foundation at the Joods Historisch Museum in 1971. If follows that the bulk of her work only enters the Public Domain in the US 95 years later at the end of 2066. In addition an earlier tranche of some 80 gouaches published in 1963 both in the US and abroad entered the Public Domain in the US in 1992 because their copyright was not renewed. However these gouaches may have had their copyright restored under the terms of the Uruguay Round Agreements Act (URAA) depending on whether their original publication in the US coincided or not with their publication abroad. It is not Commons policy to host URAA restored works.

This category has the following 2 subcategories, out of 2 total.

The following 16 files are in this category, out of 16 total.