The white tree is the symbol of WLE

Wiki Loves Earth is a photography contest in which the participants upload images of nature monuments at Wikimedia Commons, so that they can be subsequently used in Wikipedia's articles. The first edition took place in 2013 and was organized by Wikimedia Ukraine. The contest became international in 2014.

Moldova joined in 2016. The local contest is held between 1–30 June, 2018, and is organized with the generous assistance of SPPN and local eco-themed radio station Eco FM (see list of organizers). A writing contest will follow up between 1–31 July.

The goal of Wiki Loves Earth Moldova contest is to gather as much quality images as possible featuring nature monuments of Moldova. By having an extensive collection of photographies, it would become possible to illustrate articles on the country's protected areas, reserves and parks, like Codrii Tigheci, Valea Adîncă landscape reserve, Iagorlîc Scientific reserve. 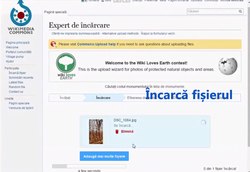 Play media
How to upload an image?

Everybody is allowed to participate, regardless of age, nationality and place of living, given they agree to publish their work under Attribution-ShareAlike 4.0 International (CC BY-SA 4.0) license.

The page ro:Wikipedia:Wiki Loves Earth/Moldova/Lista hosts all the nature monuments and protected areas of Moldova, in the following categories: