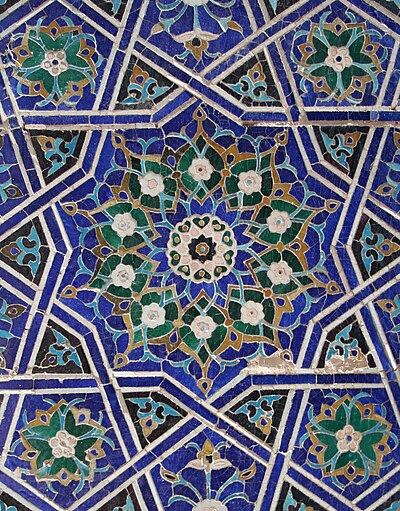 Armenian stone carving at the Cathedral of Saint James in Jerusalem.

Wood carving from Bali, made before 1937

Origins of knots in traditional art[edit]

Ornamental knot work, or interlacing, in the decorative arts of Europe and the Middle East originated in the Roman Empire during the third and fourth centuries AD. These beginnings can be seen particulartly in many Roman floor mosaics of that time.[1]

Previous to the developments of Rome, early uses of knots are found in some Egyptian symbols, particularly in the Tyet or Isis knot, and in the Sema which represents the unification of Upper and Lower Egypt. Knots are also frequently found represented in the Egyptian Cartouche and the Ankh.

J. Romilly Allen (1847-1907) published Celtic art in pagan and Christian times in 1904. The book is a scholarly study of Celtic art, and is still often cited as an important source on the subject.

Mor Gabriel Monastery (also known as Dayro d-Mor Gabriel) The Monastery of St. Gabriel) is the oldest surviving Syriac Orthodox monastery in the world. It is located on the Tur Abdin plateau near Midyat in the Mardin Province in Southeastern Turkey.

Although not as well known as Irish 'Celtic' crosses, khatchkars represent an art tradition that deserves attention.

Lutheran Church of the Redeemer, Jerusalem[edit]

Church of All Nations (Jerusalem)[edit]

Geometric interlacing patterns are a subcategory of Islamic pattern and ornament, and are a particular type of arabesque. Historically, the origins of the Islamic interlace patterns are from the more simple interlace patterns of late Roman and Byzantine mosaics[2]. One of the first Western studies of the subject was E. H. Hankin's "The Drawing of Geometric Patterns in Saracenic Art", published in Memoirs of the Archaeological Societry of India in 1925.[3]

According to Eva Baer, in her book Islamic Ornament:

Examples of geometric interlacing can also be found in Arabic calligraphy, particularly designs made in in the Square Kufic style.[5]

Owen Jones, in his catalog for the Crystal Palace exhibition, wrote about the decorative art found in Alhambra, where much of the art work consists of interwoven designs, that:

The grace and refinement of Greek ornament is here surpassed. Possessing, equally with the Greeks, an appreciation of pure form, the Moors exceeded them in variety and imagination.[6]

E. H. Hankin, in his book The Drawing of Geometric Patterns in Saracenic Art, takes the view that the artists who created these designs used a method based on the use of the compass and the straight edge.[7] This view is supported by the majority of contemporary authorities on the subject, such as Keith Critchlow in his book, Islamic Patterns: An Analytical and Cosmological Approach.[8] This explains how ornamented objects as varied in size as a book or a mosque, were treated by artists using the same geometric methods adopted to the size and nature of the object being ornamented.[9]

On the other hand Owen Jones, in The Grammar of Ornament, describes a different construction method whereby this type of interlace ornament is, instead, designed based on a foundation of geometric grids; with the same foundational grids re-drawn to the size of the object.[10]

In an English heraldic blazon, anything knotted, such as a rope, serpent or lion's tail, is described as nowed.

Nāgas are a group of serpent deities in Hindu and Buddhist mythology.

The caduceus a symbolic object representing the Greek god Hermes (or the Roman Mercury), and trades or occupations associated with that god.

Knots in art by shape[edit]

This is a traditional craft, originating in the Tang Dynasty (618–907AD), and continuing to the present day.[11].

Maiolica is Italian tin-glazed pottery dating from the early Renaissance. This type of pottery is particularly suited to painted surface decoration.

Rangoli and Kolam are a traditional artform of India, made by women with dry colored powders on floors inside houses, or outside the house. Because they are made with dry powders they are temporary.