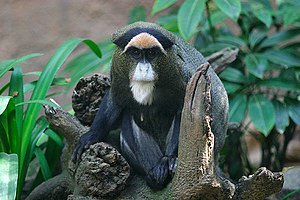 To avoid predators, De Brazza's monkeys may remain immobile for hours at a time.

The Old World monkeys are grouped into the single family Cercopithecidae, which is divided into two subfamilies: Cercopithecinae and Colobinae. These monkeys are found throughout sub-sahara Africa, Madagascar, Southeast Asia, and as far north as Japan.

This is a gallery page containing specially selected image and media files. They have been chosen as highlights of a particular topic, but do not represent the full range of files that are available on Commons. For a wider selection of files connected with Monkey, see