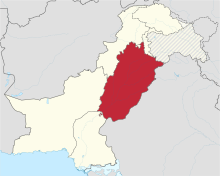 Map of Pakistani province of the Punjab

The Punjab (Urdu:پنجاب) is one of four component provinces of Pakistan. The provincial capital is Lahore. It has an area of (205,344 km²) or 79,284 mi². The most populated and is second in terms of size within federated Pakistan.

Punjab has now 36 districts and 9 divisions.

The Punjab has a rich culture, language, folk music and literature, Punjabi culture day is celebrated each year in second to the last day of the week in March.

Selected maps are included in the