The earliest known proto-reptiles originated around 312 million years ago during the Carboniferous period, having evolved from advanced reptiliomorph tetrapods that became increasingly adapted to life on dry land. Some early examples include the lizard-like Hylonomus and Casineria. In addition to the living reptiles, there are many diverse groups that are now extinct, in some cases due to mass extinction events. In particular, the Cretaceous–Paleogene extinction event wiped out the pterosaurs, plesiosaurs, ornithischians, and sauropods, as well as many species of theropods, including troodontids, dromaeosaurids, tyrannosaurids, and abelisaurids, along with many Crocodyliformes, and squamates (e.g. mosasaurids).

Reptiles are tetrapod vertebrates, creatures that either have four limbs or, like snakes, are descended from four-limbed ancestors. Unlike amphibians, reptiles do not have an aquatic larval stage. Most reptiles are oviparous, although several species of squamates are viviparous, as were some extinct aquatic clades[8] – the fetus develops within the mother, contained in a placenta rather than an eggshell. As amniotes, reptile eggs are surrounded by membranes for protection and transport, which adapt them to reproduction on dry land. Many of the viviparous species feed their fetuses through various forms of placenta analogous to those of mammals, with some providing initial care for their hatchlings. Extant reptiles range in size from a tiny gecko, Sphaerodactylus ariasae, which can grow up to 17 mm (0.7 in) to the saltwater crocodile, Crocodylus porosus, which can reach 6 m (19.7 ft) in length and weigh over 1,000 kg (2,200 lb). 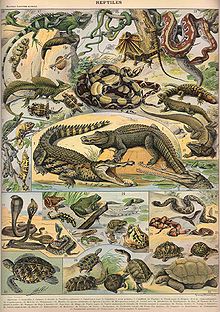 Reptiles, from Nouveau Larousse Illustré, 1897-1904: Notice the inclusion of amphibians (below the crocodiles).

In the 13th century the category of reptile was recognized in Europe as consisting of a miscellany of egg-laying creatures, including "snakes, various fantastic monsters, lizards, assorted amphibians, and worms", as recorded by Vincent of Beauvais in his Mirror of Nature.[9] In the 18th century, the reptiles were, from the outset of classification, grouped with the amphibians. Linnaeus, working from species-poor Sweden, where the common adder and grass snake are often found hunting in water, included all reptiles and amphibians in class "III – Amphibia" in his Systema Naturæ.[10] The terms "reptile" and "amphibian" were largely interchangeable, "reptile" (from Latin repere, "to creep") being preferred by the French.[11] Josephus Nicolaus Laurenti was the first to formally use the term "Reptilia" for an expanded selection of reptiles and amphibians basically similar to that of Linnaeus.[12] Today, the two groups are still commonly treated under the same heading as herptiles.

It was not until the beginning of the 19th century that it became clear that reptiles and amphibians are, in fact, quite different animals, and Pierre André Latreille erected the class Batracia (1825) for the latter, dividing the tetrapods into the four familiar classes of reptiles, amphibians, birds, and mammals.[13] The British anatomist Thomas Henry Huxley made Latreille's definition popular and, together with Richard Owen, expanded Reptilia to include the various fossil "antediluvian monsters", including dinosaurs and the mammal-like (synapsid) Dicynodon he helped describe. This was not the only possible classification scheme: In the Hunterian lectures delivered at the Royal College of Surgeons in 1863, Huxley grouped the vertebrates into mammals, sauroids, and ichthyoids (the latter containing the fishes and amphibians). He subsequently proposed the names of Sauropsida and Ichthyopsida for the latter two groups.[14] In 1866, Haeckel demonstrated that vertebrates could be divided based on their reproductive strategies, and that reptiles, birds, and mammals were united by the amniotic egg.

The terms "Sauropsida" ("lizard faces") and "Theropsida" ("beast faces") were used again in 1916 by E.S. Goodrich to distinguish between lizards, birds, and their relatives on the one hand (Sauropsida) and mammals and their extinct relatives (Theropsida) on the other. Goodrich supported this division by the nature of the hearts and blood vessels in each group, and other features, such as the structure of the forebrain. According to Goodrich, both lineages evolved from an earlier stem group, Protosauria ("first lizards") in which he included some animals today considered reptile-like amphibians, as well as early reptiles.[15]