This is a gallery page containing specially selected image and media files. They have been chosen as highlights of a particular topic, but do not represent the full range of files that are available on Commons. For a wider selection of files connected with Royal Navy, see

The White Ensign of the Royal Navy.

The Royal Navy of the United Kingdom is the oldest of HM Armed Forces (and is therefore known as the "Senior Service“).

People of the Royal Navy[edit]

Dismissed as ill disciplined pirates the swashbuckling Elizabethan navy protected the nation from invasion and filled its coffers.

Usually written out of the history of the Royal Navy are Cromwell's Generals at Sea. It was the Roundhead navy especially their defeat of the Dutch, that began the pre-eminence of the British at sea.

Admirals of the Royal Navy[edit]

Benson and Anson, Hood and Rodney, Howe, Nelson and Collingwood revered and honoured names in the Royal Navy. 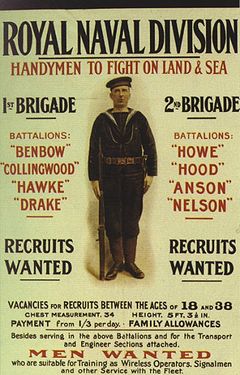 Not all of the Royal Navy's heroes have been the product of conflict. The Royal Navy has always had a place for exploration, technological innovation and science.

Often faceless and nameless in the history books the Royal Navy owes her success to the many thousands of ordinary sailors who have served in her ranks.

Ships of the Royal Navy[edit]

The Royal Navy still possesses considerable fire-power in her Surface Fleet. It's main ships are the three aircraft carriers and type 42 destroyers. In the past, the Royal Navy was mainly known for its powerful battleships, especially during the first half of the 20th century.

With the retirement of the RAF's nuclear strike role the strategic missile boats of the Royal Navy has been the keeper of the United Kingdom's strategic deterrent.

With its pre-dominance at sea, for much of the 19th Century the Royal Navy faced very little in the way of ship to ship action, instead its sailors and gunners participated in land actions in Royal Navy Brigades, culminating in the Royal Naval Division that would fight in the trenches of the First World War.

Caught by surprise and fought 8000 miles from home the Falklands War showed the prowess (and limitations) of British forces and the Royal Navy.

The Royal Navy is currently being refreshed with new programs that will see it change from being primarily an anti-submarine Cold War force to one structured for expeditionary warfare. Key to this will be the new amphibious assault ships, the Queen Elizabeth II class aircraft carriers together with the escorts to protect them.