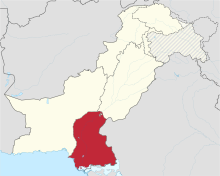 Map of Pakistani province of Sindh

Sindh (سنڌ) (سندھ) is one of four component provinces of Pakistan. The provincial capital is Karachi. It has an area of 54,407 mi² or (140,914 km²) is the second populated and the third largest out of the four.

Sindh has now 29 districts and 7 divisions.

Sindh has a rich culture, language, folk music and literature, Sindhi culture day is celebrated each year in first day of the week in December.

Selected maps are included in the