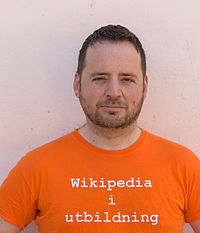 My name is Arild Vågen and I live in Stockholm, Sweden.

Since january 2013 I am the world's first Wikipedian in Academy at the Swedish University of Agricultural Sciences. I have been a Wikipedia contributor for over four years and was a board member of the Swedish Wikimedia chapter (Wikimedia Sweden) 2012-2015 and involved with several of Wikimedia Sverige's GLAM collaborations. I have an academic background in political science and peace and conflict studies specializing in Human Rights. I was project manager for Wiki Loves Monuments 2011 in Sweden.