From Wikimedia Commons, the free media repository
< User:Jack who built the house
Jump to navigation Jump to search
Translate this page
Other languages:

A screenshot of a page that uses Convenient Discussions

Convenient Discussions adds a number of elements to the watchlist: the "CD" button group to the left of the watchlist settings button and the "comment" links to the right of edit summaries.

Convenient Discussions (CD) is a JavaScript tool providing a shell over the existing MediaWiki discussion system that enhances user experience with talk pages in multiple ways.

The script's features include:

The script makes the user forget about:

A limitation of the script is that it works only in modern browsers, i.e., doesn't support Internet Explorer.

Convenient Discussions has started in 2018 as Russian Wikipedia's user script. It is being developed by Jack who built the house, enriched by the contributions and feedback from the global Wikimedia tech community and users. It also borrows the code for parsing timestamps in different formats from Matma Rex and uses solutions and ideas from the Wikimedia engineering and design teams.

To install the script for all Wikimedia wikis, add this to your global.js on Meta:

To install the script on a specific wiki where it's not a gadget, add the same code to your common.js. If the wiki has the script as a gadget, activate it in user preferences. Even if you have the script installed globally, it would make sense to add the gadget—the script would load faster on that wiki.

Every wiki has its own peculiarities that the script can address in the configuration file. Those are individual for each wiki and created by volunteers. If you know JavaScript and your wiki doesn't have one, see § Configuring for a wiki. Having a configuration file for the wiki will also speed up the execution of the script.

To make the script compatible with the script displaying time in the local time zone (w:User:Gary/comments in local time.js or w:User:Mxn/CommentsInLocalTime), call the latter like this: 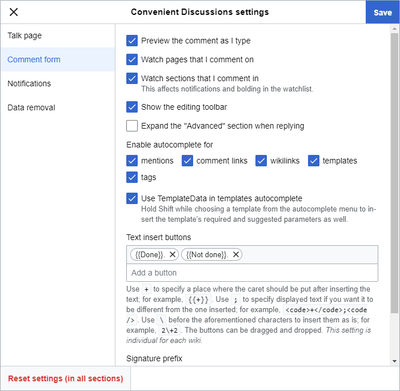 You can adjust the script according to your preferences in the settings dialog. It is available at the click of the gear icon

which can be found in the "CD" section of the watchlist and under any comment form.

The hotkeys can be found at the click of the "?" button under any comment form and on hover over the navigation panel buttons.

The script doesn't work on a page where it should work / works on a page where it shouldn't work. How to fix it?
The script uses a number of factors to determine whether it should process a certain page, such as the presence of the "Add topic" tab and the wgExtraSignatureNamespaces config value. The simplest way to make it process/not process a page is to click "Run Convenient Discussions on this page once" in the page footer. But that will work only for one time. You should contact the user maintaining the configuration file on your wiki or create your own configuration file according to the instructions below. In that file, regular expressions to match page names should be added to/removed from the pageWhitelist / pageBlacklist values. A worse way to deal with it is to add an element with class="cd-talkPage" or class="cd-notTalkPage" to the source code of the page. In that case, the page will still be classified incorrectly on log pages (the watchlist, history pages etc.).

What does "(-)" after the comment text in an edit summary mean?
It means that the whole text of the comment is displayed in the edit summary, and there is no more text in the comment other than that is displayed, so no point to open the page if you only want to see the contents of this edit. It's a notation that was used on some old Internet forums.

The comment menu (Reply/Edit/Thank/...) overlaps a user link, and I can't click it.
Make a long click/tap or right click on the block; it will disappear.

How to set settings for one wiki, not for all wikis?
Use var cdLocalSettingName = value; in your common.js on that wiki. You can get the names of the settings here (the first letter should be in upper case, for example autopreview → cdLocalAutopreview).

I would like to have :  inserted after a user mention like in the {{Ping}} template.
Hold Ctrl while choosing the name you want to mention. You can also press the mention icon while holding Ctrl — if you're replying to a comment, a mention of the target comment's author with :  will appear at the beginning of your comment.

Here's what the script stores, why, how, and how to delete the data. Note that you can delete all the data associated with the script in one click, by opening the script settings and pressing the button "Remove all script data" on the "Data removal" tab. Note that while the settings (except for a few) are global, visits and watched sections are stored individually for each wiki, so you'll have to remove them separately.

Note that other scripts that you use on wiki pages, as well as side-wide scripts, have access to this data too.

It's best to post bug reports and proposals on Phabricator under the "convenient-discussions" tag. If you don't have an account there and don't want to create one, post to the talk page (please ping Jack who built the house).

Configuring for a wiki[edit]

Structure of the project

To generate a configuration, run the generator script in your browser's console for any page of the wiki you want the configuration for. You can do it by executing

in the console. The result will contain a configuration object with values that can be automatically retrieved (system messages, some site info, template names) wrapped in the universal wrapping code. You then should create a configuration file with that content.

The meaningful part of the configuration is contained in the convenientDiscussions.config object. Its possible properties are documented here with default values, alphabetically. The source code of that documentation has them in a more logical order.

It is recommended to keep only those properties that differ from the default ones.

You can also add any additional instuctions (for example hooks) you need below the object.

If you want to debug your configuration more closely in the browser's development tools and you're familiar with Node.js and Git and have them installed, clone the script's repository, run npm install while in the script's directory to install the dependencies, create a .js file in the config folder named using pattern project_code[-language_code].js (for example, w-en.js, wikt-de.js, mw.js), and put the following code into it:

Test your configuration file by running npm run single -- project=project_code lang=language_code. A file named convenientDiscussions-single-project_code[-language_code].js will be created (and updated on code changes) in the dist folder. Load it to the wiki using mw.loader.load('http://localhost:9000/filename').

It will be best if you make a pull request to include your configuration in the CD repository. This way, if something in the script environment changes that affects your configuration file (the format of a property changes, for instance, or a default value, that your value is based on, is updated), other people including the maintainer of the script would be able to notice it and inform you and/or make changes themselves.

Your contributions are welcome! You can either improve the script itself or write plugins for it. Some notes: