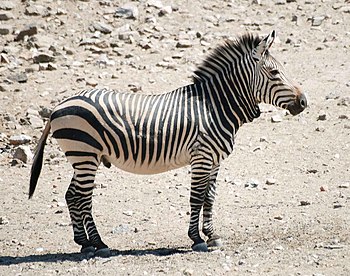 Hartmann's Mountain Zebra in the Hobatere Reserve (surroundings of the Etosha National Park) in Namibia.
This is my top-used Commons upload. As of July 2011, it appears in 13 wikipedias, 2 wiktionaries and 1 wikibook

About me. I have been a Wikipedian since 2005. I am mostly interested in Subsaharan African topics. Besides Common, I contribute to en.wiki, it.wiki (where I have been an admin for a while), and more sparsely sw.wiki and other WikiMedia projects.

About this page. This is my homepage in Commons, and it's basically just a list of contributions. If you need to contact me and need a speedy reply, I suggest you use my en.wiki homepage or my it.wiki homepage.

About these pictures. I consider myself an amateur photographer. Most of the pictures I have uploaded are my own work. Except for a few older shots, most of these pictures are taken with a Nikon D80 and processed in Adobe Photoshop.

Note: there's a few images I uploaded on it.wiki instead of here. All these are eligible to be moved to Commons. See them here.