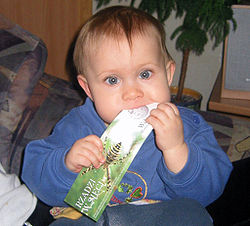 Well.. it is not me - it is my daughter, who eats promotional bookmark produced by Wikimedia Polska :-) 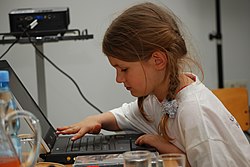 My older daughter just trying to edit Wikipedia, for the first time :-)

I am a chemist from Technical University of Lodz, involved in editing Polish Wikipedia, sometimes English and sometimes uploading pictures to Commons.

My story with Wikimedia projects begun one month after launching Polish edition of Wikipedia (at 2001), as a 7th registered user. Several weeks later I have also joined English Wikipedia, but I have registered there one year later, and have never been very active.

In Polish Wikipedia I was mainly involved in editing chemical articles, translating basic meta pages from English Wikipedia, and also many articles about various other areas of knowledge. Currently, I am responsible for maintaining and category chemistry on Polish Wikipedia.

I was co-founder, the treasuer and then president of, now, I am a president of Wikimedia Polska.