Before you get the collage-poster into the deletion issue try to check out the previous history. Because what you've done is not a good service for Wiki. I've provided already the prove of owning all the copyright for this photo-poster long time ago. As to official designer of the the festival, the organizers gave me the rights for all those pictures, 'cause they have been made by official photographers of the festival and belongs to festival. This issue has already been cleared.

Hi Tryphon I want to know why were deleted images from Vruir Galstian page, the artist is my father and I want to know where was my mistake. Most of images I scanned from Artist's book, some were scanned by other people and placed in other pages, and I copy them, but I don't think that I don't have permission to upload my fathers paintings images. Thank you. — Preceding unsigned comment added by Belinda77 (talk • contribs) 0:57, 13 October 2010 (UTC)

Hi, I have some problems with the images that I uploaded and asked for the OTRS permission to be sent the 22 of august. There has been no answer at all, and the images have been deleted. Can you help me? Thanks. — Preceding unsigned comment added by FMateos (talk • contribs) 12:42, 03 September 2014 (UTC)

Could we please delete the photo used in the article about Library Media Centers?

School librarian with card files (Minnesota, 1974) This photo is almost 30 years old. No Media Center in the state of MN still has a card catalog. This photo can be used in its place! 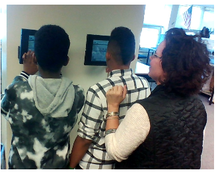