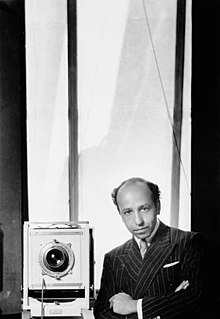 Yousuf Karsh (1908–2002), Armenian-Canadian portrait photographer. Karsh took more than 15,000 photographs of world leaders, artists, scientists, and other famous people, more than 20 of them landing on LIFE’s cover, throughout his career.

These images have been taken from the Yousuf Karsh collection at the Library and Archives of Canada, where they are marked as "copyright expired, no usage or reproduction restrictions". There has been some discussion surrounding the image of Albert Einstein, where someone claimed the image was copyrighted. The copyright office of the Library and Archives of Canada have confirmed that their labelling of these images was indeed correct and these images were in the public domain, stating that "according to the Copyright Act, any photos which are not created by a crown institution, are Public Domain if [...] created prior to January 1, 1949."

The copyright status of these pictures in the United States is unclear.