In heraldry, the definition (description or blazon) and the representation (rendition or emblazon) of a Coat of Arms are two different things. As heraldry is a very old discipline with at least 800 or more years of history, a variety of differences in custom and legal traditions can be found between different times and countries. 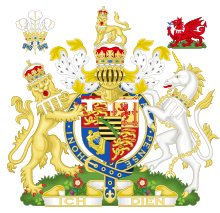 Arms of George, Prince of Wales

Two very different things are involved in a Coat of Arms:

Both the definition and the representation of a coat of arms are intellectual creations, and their legal protection may be considered as such.

To show this circumstance in certain cases, you can use the {{Coa blazon}} tag.

Definitions of coats of arms fall within the public domain in almost all cases, due to the fact that as a general rule, simply textual descriptions are not copyrightable. For example, article 2 of the World Intellectual Property Organization treaty state that “Copyright protection extends to expressions and not to ideas, procedures, methods of operation or mathematical concepts as such”. As a blazon is a textual description of an abstract idea or image and contains only the bare facts about a coat of arms in general terms, it is generally not eligible for copyright protection.

However, even if a coat of arms is specified only by a blazon or similar imprecise textual description in a governmental publication, a particular depiction (image or rendering) of it may still be copyrightable. To avoid this, some countries explicitly exempt their national emblems from copyright, although many others do not. Thus, there is little chance that copyright can be claimed on the definition of a coat of arms, although if the claim is made on a copyrighted representation, it obviously then falls under valid copyright.

This means that (from Copyright on Emblems):

Like a trademark, a coat of arms represents its owner and cannot be used for any purpose:

The respect of such legal restrictions is under the responsibility of the user.

The use of national emblems or logos is typically subject to certain restrictions outside the scope of copyright law designed to prevent disparaging or confusing uses and to avoid misrepresentations. Following article 6ter of the Paris Convention for the Protection of Industrial Property on patents, national emblems or logos cannot be used as part of a registered trademark. Using a national coat of arms in a context where the display of the arms might be construed to falsely imply an official endorsement is also generally forbidden. In the U.S., for instance, official seals typically are only to be used by official agencies. As an example, the logo of the USFWS and its usage restrictions. Any such usage restrictions are beyond copyright law however. They are designed to prevent fraudulent abuses of emblems, in particular to prevent using them to imply an affiliation with or an endorsement by an official body when there is no such affiliation or endorsement. Merely showing such emblems (for instance, in a Wikipedia article) is generally not subject to such national emblem or insignia laws, although the basic rules of copyright still apply.

Saying that a given definition is within the public domain does not mean that a given representation is, nor that derivative works are not possible. Generally speaking, the author’s copyright regarding a coat of arms is attached to the artist that draws a given representation, not to the definition (the blazoning). Therefore, a coat of arms can be freely drawn using the definition (blazon), but if you draw it as a copy of a picture “found on the internet” (or in a book), then you risk creating a derived work (or simply a copy).

To be sure you make an independent representation, based on the definition alone (and independent free models), if you have seen an image of the coat of arms, you might want to use coats of arms already within the public domain as a model for details, choose standard colours, and even consciously make different artistic choices where possible.

In a few countries, official coats of arms are considered official works, but are not subject to copyright. Such cases will often have their own PD-Coa- licence tag (see Category:Heraldry templates) which should always be used in preference to a more general PD tag. NB: Some countries with tags in Category:PD-exUSSR-exempt license tags may not have CoA tags; check the relevant PD-exempt tag for such cases.

Coat of Arms “found on the internet”[edit]

The main issue with coats of arms on Commons is not to upload copyrighted images “found on the net”, but coats of arms drawn afresh from just a description (blazon) are acceptable.

Coats of arms found on Commons may be (1) reproductions of PD-old artworks, (2) recent artwork with a clear “free” licence, or (3) self-made reproductions of non-copyrighted images. The rest should be deleted (and eventually will be). Now, if you hurry to make a SVG version inspired of a to-be-deleted coat of arms, that is fine (however check! They are easily indeed copyright violations). There is no “derivative rights” involved with coats of arms so long as the representation is based solely on the description, as the descriptive blazoning is generally within the public domain, although a specific drawn representation may not be.

How to tag images of emblems[edit]

There is the tag {{Insignia}}, which can be placed in addition to a licence tag on the image description page of images showing emblems. It informs the reader that there may be some usage restrictions on the image, even if the image is freely licensed and thus free as far as copyrights are concerned (compare #Legal restrictions on usage).

For unreferenced CoA you can use the {{Lacking insignia source}} tag, similar to {{Disputed coat of arms}} or {{Fictional|CoA}}.