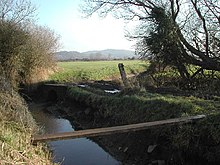 English: In principle, the colloquial "small and simple bridge" terms of different languages are used similarly, although not consistently to the last detail. It very much depends on regional/cultural/historical/etc. backgrounds, how large, long or wide a bridge can be, to still be denoted as "small and simple". However, there are a few suitable criteria to narrow down the core which all these terms have in common (see also borderline cases):

Small and simple bridges by material[edit]

English: The following images should illustrate the language-dependent limits of the above definition. In some languages one or more of these bridges might still be called "small and simple", in others not.
Retrieved from "https://commons.wikimedia.org/w/index.php?title=Spang&oldid=533106901"
Category: