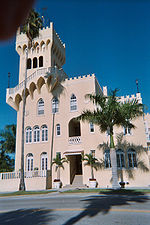 Hey folks, 'tis I, Ebyabe, in sunny (well, mostly) Florida. I'm currently taking pics of sites in the state on the National Register of Historic Places, as well as various State Parks here. Torreya State Park, where I took the above picture, happens to be both. For more about me, see my user page at the English Wikipedia.

I started with disposable cameras, but really went to town when I got my Kodak EasyShare C875 in January '07. I added that category to all of those I upload, which you can see has added up over the last few years.

During a trip in late June 2011, the C875 finally gave up the ghost. I had to get a new camera, which was actually better than what I had. I stayed with Kodak, and got the C195. So new photos will be in that category.

The counties in Florida I've visited and in which I've taken pictures. Have visited all 67 counties in the state. However, I didn't take all the photos in these categories. For those, go down to the sections below. Italicized counties have no NRHP listings:

Here's the links to the pages of pictures I've taken:

User:Ebyabe/gallery - Where Commonist adds copies of the photos I upload