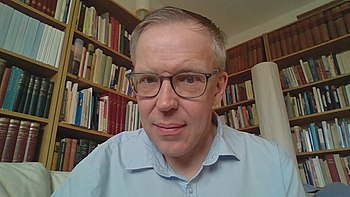 December 14, 2017: I create Category:Surveys of governorates of the Russian Empire and an index on its talk page.

June 1, 2015: I have great help of Geolocator for the photos in category:Linköpings mejeri.

May 24, 2013: I learn that user:Fred ande, working for Sweden's Royal Armoury (Livrustkammaren), has uploaded letters by queen Christina (17th century), intended for transcription in Wikisource.

When I try to use ffmpeg2theora with the -s and -e parameters, it never cuts exactly where I want it to. Here is a command that works:

Instead of uploading individual clips, it should be possible to address parts of a longer film. This is possible with timed links, see phab:T28663, User:Mdale/TestTemporalUrls and category:Män och maskiner 1936. Some problems:

October 18, 2009: I upload my first screencast, File:Recordmydesktop-svenska.ogv. I used recordmydesktop under Linux, and the film is an instruction movie with Swedish voice for how to use that program.

October 13, 2009: I upload my first sound file, File:LA2 dont walk.ogg. I'm using a Zoom H4n for recording and the Linux program oggenc (with default settings) to translate from WAV to OGG format.

December 6, 2008: I join commons-l and post a message about the need for Making Wikimedia Commons less frightening.

October 4, 2006: I upload 128 photos having names starting with LA2-vx06 from OpenStreetMap's mapping weekend in Växjö.

August 29, 2006: Some photo geocoding script for Linux is available at http://www.carto.net/projects/photoTools/gpsPhoto/

August 28, 2006: If you add a "coor" template, specifying the geographic coordinates for an image or article, it will be added to the category:Media with locations, which currently contains 859 images. The following elegant sed script filters out the locations from the XML dump. However, there are more templates that does similar things, and the templates have aliases via redirects, e.g. {{Map-LatLong}} and {{Gbmapping}}.

August 26, 2006: I'm going to try photo safaris of Växjö and Västerås on two weekends in October, combined with OpenStreetMap mapping weekends. But what should I capture? Is there a checklist or a wishlist? These are two medium-sized cathedral towns (50-100 thousand inhabitants) but what number of images is reasonable? There are great variations in the number of images in various subcategories under municipalities of Sweden, in part but not fully explained by the size of the cities: Stockholm 969, Göteborg 778, Malmö 375, Lund 325, Norrköping 258, Linköping 211, Karlskrona 199, Uppsala 166, Västerås 166, Uddevalla 160, Falköping 98, Lidköping 79, Motala 73, Söderköping 69, Ronneby 68, Strängnäs 68, Södertälje 63, Kiruna 60, Kalmar 57, Sundsvall 57, Luleå 56, Skara 50, Jönköping 45, Vänersborg 35, Trollhättan 33, Karlstad 30, Nyköping 27, Skövde 27, Umeå 25, Ödeshög 24, Karlsborg 22, Mjölby 21, Gävle 20, Örebro 15, Borås 13, Halmstad 12, Varberg 12, Växjö 11, Mora 9, Valdemarsvik 9, Falun 8, Finspång 8, Östersund 8, Arboga 7, Haparanda 7, Västervik 7, Eskilstuna 6, Lilla Edet 6, Norrtälje 6, Askersund 5, Kumla 5, Åtvidaberg 3, Kinda 3, Borlänge 2, Enköping 2, Ydre 2, Hallsberg 1, Lekeberg 1, Sala 1. Of the 166 images for Västerås, 84 are found in the sub-subcategory Power Big Meet 2005 covering a single car enthusiast event. Of the 21 articles for Mjölby municipality, 16 are from the small town Skänninge. The counts are based on the CatScan tool, which searches both categories and gallery articles. I just created a category:Commons:Geocoding.

December 19, 2005: My small contribution to the Wikimedia Foundation fundraiser is two small banners in Swedish and English.

October 2005: I continue to scan and upload to Wikisource The New Student's Reference Work, 5 volumes, 1914. Here are some maps from the two works:

September 2005: I scan and upload images of book pages from Meyers Blitz-Lexikon, 1932, a 440 page, one-volume German out-of-copyright encyclopedic dictionary, which is then presented with OCR text on the German Wikisource.

August 30, 2005: I create a category:public domain maps from demis.nl and start to upload a dozen maps.

August 4-8, 2005: During the Wikimania conference I took this photo from Frankfurt am Main:

July 2005: I uploaded my old panorama of Riddarfjärden, Stockholm.

May 2005: Inspired by the fine spring weather, I went out to take some photos of my home town:

This also led me to think about connecting geographic coordinates (by GPS?) to photos. In my continued search, I found the website GEOsnapper and to try it out I uploaded some of my old photos there [1]. For all fairness, I also uploaded the same photos to Wikimedia Commons with a CC-SA license, geo coordinates included: Åbacka Café, Bergs slussar, Borgs konditori, Brooklyn Bridge, Buy Nothing Day, Carins Conditori, Deutsche Bücherei, Flygvapenmuseum, Universitetet i Greifswald, Gyllentorget, Hillsdale Inn, L-Center, Lindhska bokhandeln, Lövsta slott, Martin Luther, Medborgarplatsen, Norrköpings stadsbibliotek, Nora, Oakland, Santa Barbara, San Francisco city hall, Stockholms stadshus, V2-raketen. The same pictures have later also been uploaded to flickr and geotagged with geobloggers.

April 12, 2005: Just before the PixelACHE conference in Finland, a Dot Org Boom seminar was held at Finland's embassy in Stockholm, where Wikimedia Foundation board member Anthere was one of four speakers. In the audience was me and Steve Rapaport. I took these four photos.

April 2005: Some more books. These are from Norway:

The setup from behind

The big picture of the setup, without flashlight

The final picture, with flashlight, cropped, and rotated 90 degrees, as used in fi:Tietosanakirja

Of course I'm careful not to violate any authors' or publishers' copyright when I publish photographs of book pages. Many of these books are old enough to be in the public domain, and where this is not the case I'm only publishing low resolution images that just give the reader an idea of the book's look-and-feel but don't reproduce the contents. I was told that "in Germany, not even thumbnails are allowed" with reference to a court case in Landesgericht Hamburg, September 5, 2003. However, this court case was about Google News publishing thumbnail images of photos that belonged to a German news agency, and I don't think that case is similar to my photos of book pages. In the German court case, the individual photos were of commercial value (the news agency wanted to sell them) and the thumbnails served as a replacement for Google's buying the right to publish the photos. My book photos do not (can not) serve as a replacement for the book pages that I'm depicting (and, of course, much less can they replace the entire book). However, I am not a lawyer (IANAL).

In the case of public domain books, I hope to scan them sooner or later. Pieni Tietosanakirja, 4 volumes, 1925-1928, is already on its way. In it I found some very nice maps of Asia, Europe, central Europe, Scandinavia, the world as well as plates of birds, flags, salt water fish, and sweet water fish. The texts on these maps and plates are in Finnish, hope that's ok.

January 2005: I uploaded my first photos, depicting some places and buildings in Sweden.