The languages of Bangladesh, of course.
Bengali Here is the map in Bengali..

My goal is to create integrated maps, maps intended to be read alongside the text, highlighting important places mentioned in the article.

While large comprehensive maps have their own encyclopedic uses, they do not work well as a guide to places and other information in the article -- editor will almost always reduce that map's size to the point where it requires the visitor to click to another screen just to read it. But then the map is divorced from the text and the visitor can no longer easily locate places. She will usually just give up rather than click-and-load back-and-forth.

An integrated map, on the other hard, can be read from the article itself. This allows the visitor, as she reads thru the text, to locate the various unfamiliar placenames on the map and then go back to reading with a quick eye movement (and repeat down the page). 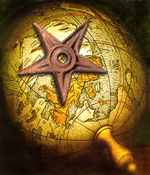 The Mapmaker's Star. You deserve it for making what could quite possibly be the best and most useful maps on Wikipedia. Keep up the great work! Oreo Priest 11:02, 1 February 2008 (UTC)

A bit of background[edit]

I am also a fan of Edward Tufte and I think it's important that maps (or any visual informative media) are clean and easily understandable, with little if any window dressing. This does not mean, however, that maps should be drab. Au contraire.

I use Inkscape to create my maps. I believe that SVG is the best format for maps, although the font support here in Wiki-land is poor (see discussion here).

I try to work on the requests at w:en:Wikipedia:WikiProject Maps/Requested and orphan maps, but you certainly may leave a request on my Talk page.

I would be very happy to translate any of my maps into another language.

The following maps do not contain any labels. Such maps are useful under some circumstances, but the general geographic area must be recognizable to the average reader. The disadvantage, of course, is that these maps are less informative, but such maps can be useful in a multi-language encyclopedia.