The first implemented feature for Structured Data on Commons will involve file "captions". Captions are the equivalent of short descriptions, and enable users to enter brief descriptions of media in multiple languages. The captions will be stored on Commons as structured data using Wikibase, using the MediaInfo extension, instead of Wikitext (caption information will not be stored on Wikidata).

Structured captions allow users to make use of an easy-to-use multilingual field for concisely describing files, help the search algorithms prioritize text for search rankings, and provide a simple, consistently formatted string for machine reuse. Captions will also live on file pages, where users can read captions added through the upload process, as well as add and edit captions to those file pages.

Currently, the multilingual caption Upload Wizard prototype is in a test and feedback phase. Additionally, due to the issue of the term “caption” being confusing for many people, we are performing research on different ways to call this metadata field and we will continue to work together to figure out how best to handle this new structured data field.

Note: the copy used in each of the examples is for illustrative purposes.

Displaying captions supports two design goals: making the preferred language (via preferences or extensions like Babel) visible to users if available, and making it clear how to add captions.

Captions will appear close to the image to give an idea of what the image is about, and is a piece of metadata that can appear in search results on Commons, in the MediaViewer, or other potential uses. 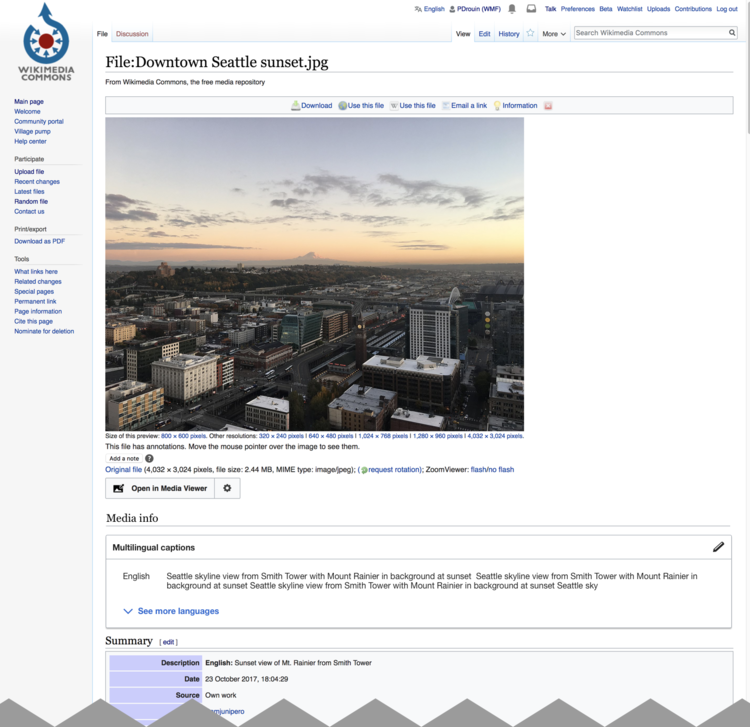 In this first image below, a file has no caption, and includes a clear call-to-action for someone to add a caption to it:

In the next image below, there are already captions, and the system defaults to the user’s preferred language while collapsing the rest:

The third image below shows all the captions available in an expanded view:

File Page’s multilingual caption widget supports three user actions: editing, adding, and deleting captions. The design of the widget’s interaction is to promote adding and editing captions, facilitated by an interface that anyone use can contribute metadata in order to support the enrichment of files. User rights are decided by the Commons community, we recommend deletion of captions is reserved for admins to reduce the amount of deletion, whether intentional or unintentional.

Not every file will have a caption once structured data is fully implemented on Commons, where users can add structured data through the Upload Wizard and add structured data to existing files, etc. Ideally, metadata will be added most often during the upload process. In the meantime, many files will need captions, and users of all familiarity levels should clearly understand how to contribute captions.

To add a caption to a file that doesn’t have one, users will select the “Add a caption” button:

Next, they will choose their language, write a caption between 5-255 characters (and add more captions in other languages, if desired), and then publish it: 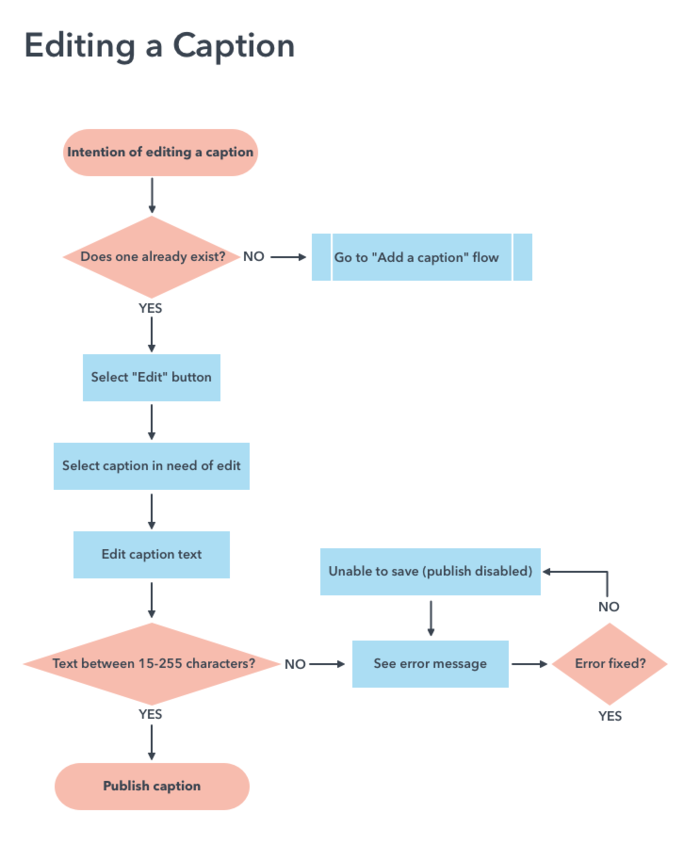 The maximum character amount is 255 (see this Phabricator ticket for more information). In order to keep captions as short as possible, an auto-expanding field can be implemented to encourage concise captions (similar to Twitter’s text input field for tweeting). It expands as the sentence expands, and only until a threshold is reached will the user get a message that there are n characters left (exact number to be determined). Once text goes over 255, an error message displays and the changes can not be published until the issue is fixed.

While all users should be able to add and edit captions to promote the quantity and quality of metadata on files, it is conceivable that deletion rights might need to be handled differently in order to decrease the likelihood of accidental deletions or intentional deletions that may be considered vandalism.

This design concept proposes that the user flow for all users is optimized for adding and editing information, and that the ability to delete information is for users with admin rights. This is a concept design; in the final deployment of the feature, this right could be assigned to a broader group of additional users with other rights situations (i.e. autopatrol rights, autoconfirmed users, or even all signed in users). The following designs for deleting captions present the scenario of a signed-in user who has the right to delete captions. Which user-right scenario that this function is tied to will need community consideration, discussion, and consensus. 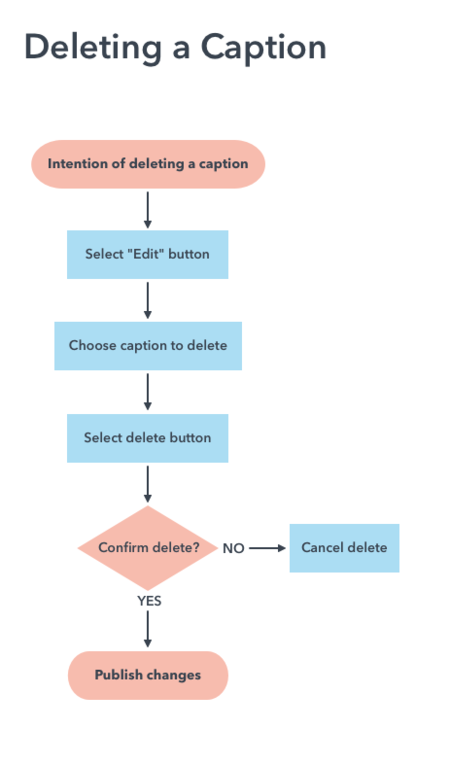 In this scenario, an admin must delete a caption because it is potentially offensive (whether intentionally or unintentionally). That user would select the edit button, and be presented with an edit view of the captions:

The admin will then be able to delete whatever caption needs to be removed:

In this section, there are three examples of user flows: adding an initial caption, adding an additional caption, and adding yet another caption.

Design Goal: For Thomas to add a caption English (his preferred language) to an uncaptioned image’s file page.

User flow is abbreviated to its main points: 1) initiating adding a caption, 2) after having selected the language, the field is focused to prompt inputting the caption, and 3) showing the published caption

Design Goal: For another user, Helen, to add another caption to the same image’s file page. Her preferred language is English, but she is also fluent in French. Once the French caption is added, her preferred language of English is still shown while the French one is collapsed from view (reducing the height of content elements so that scrolling on Commons is lessened on File Pages, as well as giving more prominence for additional content on the page).

User flow is abbreviated to its main points: 1) initiating adding a caption, 2) after having selected the language, the field is focused to prompt inputting the caption, and 3) showing the published captions.

Note: In the edit view, the English language selector is not editable, but the English caption field is editable. 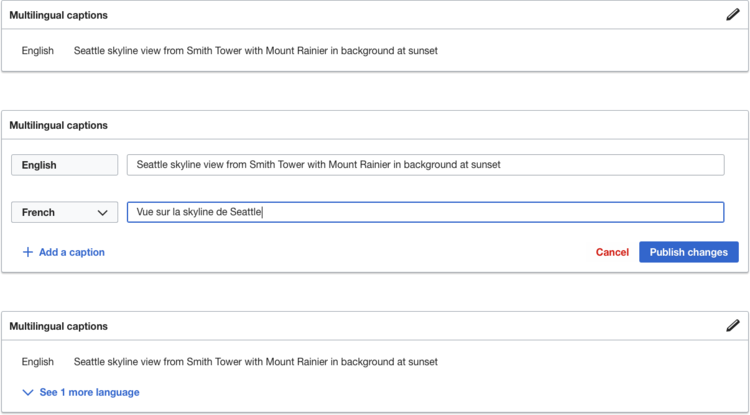 Adding an an additional caption in a different (preferred) language[edit]

User flow is abbreviated to its main points: a) initiating adding a caption, b) after having selected the language, the field is focused to prompt inputting the caption, and c) showing the published caption, which is the user’s preferred language.

Note: the language selections of the previous captions are not editable, but the text of the captions still are. Spanish is still editable, because Miguel is still in the process of creating it. 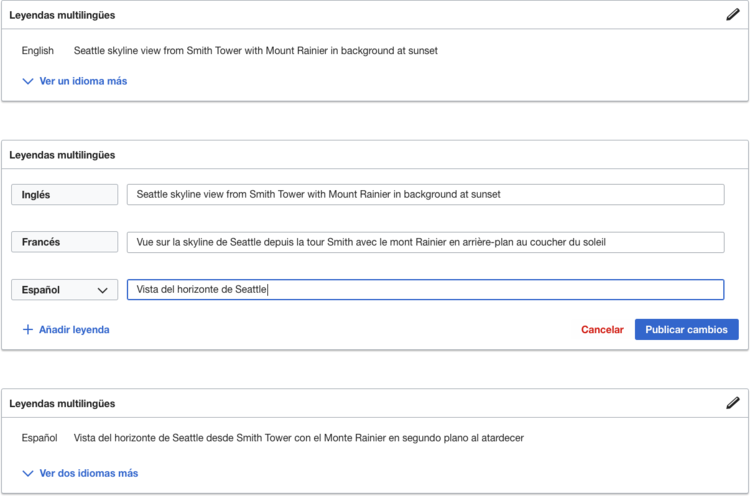 Leave your feedback on the talk page