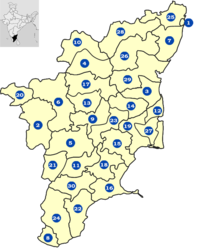 The 34 districts of Tamil Nadu are as listed below with the numbers corresponding to those in the image at the right.

Ariyalur district, which was created in 2001 from the Perambalur district, was restored as the 31st district of Tamil Nadu on the 23rd November, 2007. The TN government has also announced that Tirupur will be the new headquarters of the Tirupur district which will be formed by splitting the Coimbatore and Erode district.<

This category has the following 39 subcategories, out of 39 total.

The following 7 files are in this category, out of 7 total.