How to translate an SVG file[edit]

This page explains how to translate inside labels or captions in an SVG file. You are probably here because someone tagged an image with {{Translate}}. Please note that this template and its related pages is a one-man idea. If you have questions or comments about it, please use the template discussion page.

SVG is an image file format that consists of plain XML text. Therefore the text labels stored in it can be easily translated. For more information about SVG or XML, please use the links. There are Wikipedia articles in many languages.

How do I edit SVGs?[edit] 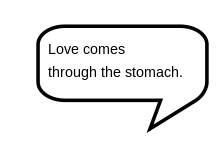 An example of a simple SVG with translations in one file. Go to file's page and render this text in English, German, French, Spanish...

There are different ways to translate text in SVG:

For editing image in any offline editor, first download the file you want to edit, open the file in the editor, translate the labels, and then save it. When finished, upload the file to Commons under a new name.

Note that instead of using a graphics editor, you can use any text editor capable of using UTF-8. Find text to translate by searching for <text> tags. In some cases this might be a path for more advanced users as text coordinates adjustments might be needed and some more advanced "garbage" might decrease readability of the SVG.

Preparing a file for translation[edit]

Only real text, in the form of the SVG <text> element, can be translated. Do not use paths in place of text.

To make sure text placement "just work" in the translated versions, you should properly use the anchoring functionality of the SVG format and your editor. In most editors (including Inkscape), the function is decided by the typographic alignment option. Anchoring decides how the position of the text is specified. Anchoring to the center means the coordinates specified is the center of the text, and is used in most editors for centering.

By saying "properly use", we mean that the way you anchor it matches the actual design intentions. For example, to center some text on a pyramid, you use the centering anchor while putting the anchor point itself at the middle of the shape. To position a label for something on its right, use the "end" (right-hand-side) anchor. The "align and distribute" option in Inkscape DOES NOT change your anchoring options; it only moves the elements around.

(Yes, the "end" anchor is only on the right for left-to-right languages. A translation tool should probably invert it for RTL languages.)

Using numbers instead of labels[edit] 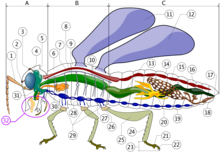 Image:Robal.png. An example of a image with few labels.

On images with few labels, an alternative is to have only one file with numeric labels in it and a table below, with different translations, and there is thus a single image that can be used for all languages. Image:Robal.png is a good example.

If you think this image will be better with numbers instead of translated text, you can change {{Translate}} template to {{Convert to international}} or make numbers yourself.

How to place new language version in Commons[edit]

For linking different versions of file one to another, use "other versions" templates like all in Category:Other_versions_templates. Copy one of them and use in your image.

Using the template creates a gallery of the different language versions:

Also the template {{Derived from}} will be useful to display link to original version of your localized image.

An example of a simple SVG with translations in one file. See the description page for details

You can place multiple translations into one SVG file using the SVG <switch> element. The resulting multilingual file has the advantage of sharing graphics; if the graphics are updated, then all the languages get the updated graphics. Compare to having several translated files; an update to one of the files does not propagate to the other language versions.

It is advisable to give an extra margin for text contained in images with switch elements, in order to allow for current or future languages that need more letters.

Note: The order is important! All children following the child with the omitted systemLanguage are ignored and have no effect!

You can also have a systemLanguage attribute on an element that is not a child of a switch element. In this case the element will only be rendered if the language matches. Otherwise the element in question will not be displayed.

Currently, only a few graphical editors support language switches in SVG, so you may need to edit the SVG file with a text editor. The SVG Translate may be used if the SVG file follows specific conventions.

The different text translations will have different lengths, so the text anchor point should be chosen carefully. The text-anchor attribute can be set to start (left justified in most languages), middle (centered), or end (right justified). The text elements default to x="0" and y="0", so the switch element can set the text anchor point with transform="translate(100,200)".

When rendering a multi-lingual SVG image on a MediaWiki page, the language to use can be specified using syntax like [[File:SystemLanguage.svg|lang=de]]. The attribute "lang" is optional; if it is missing, MediaWiki will attempt to use the wiki's default language or fallback to English ("en").[2]

Setting up multiple translations within one SVG file with Inkscape[edit]

Inkscape does not support the addition of language switches, but they are recognized as a "Conditional Group". Editing with text editor is required. To start using the switch element in Inkscape, the following steps are:

Most browsers support viewing SVG files with switch elements. The browser will display the languages according to the browser's default language settings. If one wants to view a different language, then change the language of the browser and restart it.

Another way of viewing the file is to upload it to File:Test.svg and select the desired language from the dropdown list.

You don't have to translate this part; it should be enough if this information is here in English. Users who do not yet have a version in their language will find it here, I guess.

You can support this template by translating this help page into your language and saving it as a sub-page. The template consists of three parts. For example, for the German template they are:

The template page should contain the template itself and the quick info text translated from the English template.

The language link template is the same for every version of this template. It contains all the links to existing language versions. Please add your language there and there, if you have created a new translation.

Thank you for your support!