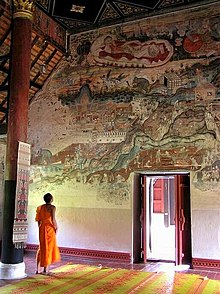 Wat Nong Bua in Nan Province, Thailand, is my most favourite temple of all that I keep going back to every time I am in the neighbourhood. This is an old photo, made with an older generation digital camera. It is also oversharpened but fond memories overshadow all that.

Travel, food, and photography are my main interests.

All of my contributions to Wikimedia Commons can be viewed here.

These are some of my contributions that I am happy with:

Besides contributing images, I also clear up and categorised media, for instance in:

And lots and lots more!

Why I enjoy categorising media here on Wikimedia Commons is because I actually enjoy looking at random photos made by random people of random subjects and then try to understand what I am looking at. Give it a try, you might like it too. I also catch out a lot of copyright violations and other inadmissible files this way.

I reduced the amount of categories that I have been maintaining at a certain moment, because I couldn't be bothered any longer. After once returning from a 3 week holiday, I discovered that too many of the categories on my watchlist have been again flooded with files that do not belong there, mostly because of "category spraying" by mass uploaders and over-categorisation (or just very incorrect categorisation) by newbies whenever a drive for images is organised. Perhaps a new system for categorisation can be implemented eventually which does away with the endless hours and hours of work forced upon volunteers by clueless and/or lazy uploaders? And perhaps a new way of handling uploads from drives to bolster images of certain subjects to Wikimedia Commons can be devised? I have some suggestions!

Why I stopped caring about categories[edit]

Apparently, people here on Wikimedia Commons just prefer to muddle through without much of a system. Everyone can just do what they feel like doing. Fine by me if that is what people want but it made me stop caring about how to streamline the categorisation process, and made me stop caring about many (often intentionally) flooded categories. People botching up categories because they think that it's better that way (like arbitrarily removing two categories that are of the same order as the 50-odd left), doesn't bother me much either any longer. It'll all be ok in the long run. :)

Categories often get contaminated and/or too full. Please "adopt" a few categories, clear out the loose files, and revisit them regularly for maintenance. By putting them on your watchlist, you also get to see which files are added to them. If everyone does this, categories in Wikimedia Commons would be much easier to navigate, and files would be much easier to find.

All three irritations show up here in this file: a disgustingly photographed image of an absolutely fake Thai curry. It was made by someone in the USA but of course not originally categorised as such. This is so completely wrong...

Idiot upload bots that robodump 500+ related images into the same set of broadly defined categories whereas they could all have been put into one specific category, which would then be a subcategory of the set of categories. A suggestion to the unimaginative: try making the book title a separate category as most of these images that flood main categories are sets of illustrations that come from a book. I guess the bots themselves are not really to blame for being so idiotic, just the people using them....

Some people categorise media that are missing categories in the most simplistic ways apparently because for some reason or other, they are in a hurry. If for instance they see the word "district" in the image title, yep! quickly shove it into "Category:Districts of ..." and it doesn't really matter what else is shown on the image. Even the most gorgeous landscapes that would have been a credit to "Category:Landscapes of ..." are just lost that way until someone else accidentally happens upon them while perusing the "districts of ...." category and actually thinks of checking the categories of the images therein. Unfortunately, that lucky happenstance is not too likely to occur. It is actually a shame that these simplistic categorisors operate here on Wikimedia Commons because their method can cause great images to disappear into somewhat obscure categories where no one would think of looking for them. Some of these categorisors even pride themselves on the huge amount of simplistic edits that they have made, using it as a means of downplaying all well-founded criticism on their lack of true editing skills or lack of patience. If they don't seem to really care about the images that they are so hurriedly shoving into oblivion, then why do they actually do this kind of volunteer work? Is it that they want to further up their edit count as quickly as possible and that that has become an end in itself? Does increasing their edit count so rapidly perhaps in some strange way give them a feeling of personal empowerment? A dopamine kick? We'll probably never find out. I doubt it that they themselves know.
I gave the "quick and dirty" way of categorising media a try for a few images. It just doesn't work and stuff sometimes ends up in incorrect categories. That was the end of this experiment, at least for me. <- Update: I've come to the realisation that this sweeping style of categorisation actually works for processing files that are completely uncategorised. It only stumbles when processing semi-categorised files this way as these often need more "individual" attention to do them (and the Commons category system) justice.

There are some surprisingly silly people busy here on Wikimedia Commons.