Depicts is a feature part of structured data. It was enabled on Wikimedia Commons on April 23, 2019.

How to add a Depicts statement

To add a depicts statement:

If you have trouble finding the right Wikidata item, test alternative spellings, or try navigating from a Wikipedia page about the item (using the "Wikidata item" link in the "Tools" menu on the left of the Wikipedia page).

If there is no Wikidata item associated with the subject depicted, consider whether it meets Wikidata's Notability standards.[1] If so, consider creating a new item.[2] If not, choose a more generic item which includes your subject as an example.

What items to add

Please only add "depicts" statements conservatively at first, while the community learns how to use this tool best.

Be as specific as you can. For example, for the image File:Black hole - Messier 87 (cropped).jpg the best primary statement is Depicts: Pōwehi (Q3841190).

If there are multiple items clearly and deliberately depicted by the media file, all should be added as separate depicts statements, within reason. For files that depict dozens or hundreds of items (e.g., movies) only list those items which are most prominent.

If groups of the multiple depicted items are a common grouping, and have a grouped item on Wikidata, the grouped item should also be added as a depicts statement. For example File:Bonnieclyde f.jpg depicts: Bonnie and Clyde (Q219937) as well as depicts: Bonnie Parker (Q2319886) and depicts: Clyde Barrow (Q3320282). 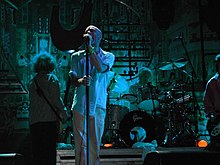 There is also an option to mark a particular item as "prominent". This property refers to the item's prominence in the piece of media, so a photo like File:Padova REM concert July 22 2003 blue.jpg depicts singer Michael Stipe, bassist Mike Mills, and guitarist Peter Buck but only Stipe is prominent, as he is clearly visible at the center of the photo, whereas Buck is mostly cropped out of the right-hand side and Mills has his back turned to the camera. When querying the structured data, prominent statements can be found be searching for statements with rank "preferred".

What items not to add 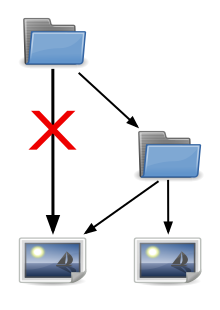 Do not add an item as depict if there is already one which is a subclass of the one you want to add.

It has also been suggested (for the purposes of good coverage in the search function) to "tag" more generic items that have your specific item as an instance or subclass. In the File:Black hole - Messier 87 (cropped).jpg example above, you could also imagine adding Depicts: supermassive black hole (Q40392) and Depicts: black hole (Q589), because Pōwehi (Q3841190) is an instance of a subclass (supermassive black hole (Q40392)) of black hole (Q589). This would contrast with how we use categories on Commons, where we try to prevent overcategorization. These generic "tags" should not currently be added if more specific depicts statements already exist. If this guideline changes, these more generic items may later be inferred from the relationships in the structured data on Wikidata.

Parts of a bigger item

The depiction of a face (Q37017) usually implies the presence of a nose (Q7363), nostril (Q858590), and nasal hair (Q1899093). It is not necessary to list them all on every portrait. Instead just state that the portrait depicts the person in the portrait. Anatomical or other compositional relationships can already be modelled within Wikidata.

Items expected to be covered by other statements

Many media include incidental items, actions, locations, context, formatting choices, or background, that are not the primary items depicted. As structured data on Commons expands, we expect to have additional properties enabled where these extra items can be specified. In the meantime, it is best to refrain from specifying these as depicts, unless they are central to the purpose of the media.

For example, some expected properties include:

There is an API to create statements, however bot frameworks (such as Pywikibot) may not have implemented it yet, making it less straightforward to add statements via bot. Better implementation will be implemented later. 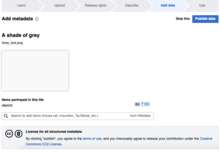 You can add Depicts statements via the default upload method, UploadWizard.

For other upload methods, support may be added in the future − you may refer to the respective bug tracker of each tool for more information.

Depicts statements can be searched using the keyword haswbstatement. For example, if you wanted to find all instances of depicts (P180) a Q146, use: haswbstatement:P180=Q146.

Later on, there will likely be a way to query depicts through SPARQL (T141602), as well as access through Lua.

Depicts, like all statements, can be queried through the SPARQL query service.

You can retrieve statement using the wbgetentities or wbgetclaims module with the entity ID. For each file there is a Wikibase entity ID MXXXX, XXXX being the page_id. So for example, File:Monument Demba et Dupont.jpg has the page ID 76359368, so the entity ID is M76359368, and you can query wbgetentities&ids=M76359368. An easy way to get the Mid is to use the API action=query&prop=info&titles=File:Monument_Demba_et_Dupont.jpg (the page ID is provided by the pageid field).

You can also create statements using wbcreateclaim. See the addClaim() function in this script for an example of how to implement wbcreateclaim in Python.