Modeling of various types of depiction information in structured data, for files on Wikimedia Commons, is mostly done through depicts (P180) property and its qualifiers. See Commons:Essential information for section on different styles of sources.

The Wikidata depicts (P180) property is widely used on Wikidata to describe the content of certain items. It is now available on Wikimedia Commons to give structure to media descriptions, as part of the Structured Data on Commons project. It is used by more than 8 million files on Commons (May 2022).

Prior to the introduction of structured data, file information and categories on Commons could only be added in a single language, which was most commonly English. The Wikidata depicts (P180) property, however, can be described in multiple languages. Adding depicts statements to media files therefore transforms Wikimedia Commons into a truly multilingual platform, where readers of any language can find, understand, and use media files.

Depicts statements are used by MediaSearch to find the most relevant results.

At first, MediaSearch runs queries that include statements and captions that use Structured Data. Next, it expands and searches terms based on Wikidata labels (the most common name that a Wikidata item would be known by). Lastly, it can further expand based on Commons categories and text-based information. All of that means that, in addition to full-text matching, MediaSearch will also include results that have a depicts statement of any Wikidata entity that matches a user's search term. It will also include results that have a relevant digital representation of (P6243) statement.

Depicts are also used by tools that help users find relevant images for unillustrated Wikipedia articles, a new feature in development. You can learn more about image suggestions here.

How to find depicts statements[edit]

A gif representing the tab where Structured Data appears on a Commons file, how to add a depicts statement, and how to mark a statement as prominent

The depicts statements on Wikimedia Commons are available on the page for the media file, but on a secondary tab, the Structured data tab, which can be found beside the File information tab.

Depicts statements are also used to suggest images on the Wikimedia Commons MediaSearch. This search works by ranking images accordingly to the certain structured data, like depicts, that are inserted into the images. Through the Structured Data Across Wikimedia initiative, depicts statements will also be used to suggest images on Wikipedia articles in various languages, in the image recommendations project.

How to add depicts statements[edit]

Currently, the main way depicts statements can be added to Wikimedia Commons media files is through the media file's main page, on the Structured data tab, but there are some other means.

Users that upload to Wikimedia Commons using Upload Wizard are also led to insert depicts statements (the only Structured Data information requested) into their files to help identify what is portrayed in the media.

Tools are also available with depicts capabilities, like the ISA tool, AC/DC, SDC, Image Annotator, and Quickstatements. Learn how to use them on this page.

How to search depicts statements and its qualifiers[edit]

There are three ways to search depicts statements on Wikimedia Commons: using the usual Structured data interface in every Commons file (or Structured data tab), using the MediaSearch, or through Wikimedia Commons Query Service (WCQS). All these alternatives allow searches with depicts and qualifiers. The MediaSearch also allows you to search depicts statements on specific Commons categories.

Find more more details about how to search Structured Data on Commons here and how to use the Wikimedia Commons Query Service here.

Every Structured Data on Commons edit, including depicts (P180) added to media files, will take a few days to be displayed on the Wikimedia Commons Query Service, as this tool is still being developed.

The primary purpose of depicts (P180) statements on Commons is to identify, in a structured way, the items clearly visible in a media file.

Wikidata has many entities at varying levels of detail and MediaSearch can't reliably infer relationships between them. Therefore, to optimize a media file for discovery, you should add multiple depicts (P180) statements, both general and specific. For example, this image of the fictional dog Lassie should have the statements dog (Q144), Rough Collie (Q38650), and Lassie (Q941640). To differentiate the level of importance of each statement, you should mark the most significant element as prominent and apply qualifiers (see both sections below).

Another example is this image of a Sequoia tree, which should have both Sequoia (Q1975652) and tree (Q10884) depicts statements. Even though Sequoia is a tree, in the Wikidata ontology Sequoia is considered a subclass of taxon (Q16521). For that reason, searching only for tree would not be enough to find media files depicting only Sequoia (Q1975652) and not also tree (Q10884). In other words, MediaSearch currently only looks at the Wikidata objects that are directly listed as being depicted on the file itself; it is unable to make logical inferences, such as the fact that depicting a Sequoia entails depicting a tree. This redundant tagging is disputed so please don't do it on a large scale.

To clarify, it's also very important to understand that Structured data on Commons does not function like the Commons category system, currently does not intend to, and it does not have the same clear hierarchy and division. The structured data in search and the functionality of the search engine is still very incomplete and not even near the usability of the category system, which itself is quite hard to use.

This section is not up to date with the new modeling guidelines. New examples should be added. 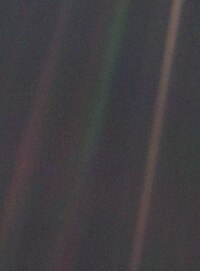 In the depicts (P180) statement, it’s also possible to identify the main features of the image using the ‘mark as prominent’ option. This is particularly important if many depicts statements have been added to a file.

To choose which depicts statement to 'mark as prominent', you should ask yourself:

Consider the Pale Blue Dot photographs: even though the earth makes up less than a pixel in the image set, it's a significant feature of the images. The “mark as prominent” depicts (P180) feature for statements is provided to address some of these issues.

The Sessão do Conselho de Estado (Q43485263) painting is also a good example of the use of ‘mark as prominent’. There are several characters depicted in the work, most of them on the same disposition, but the main subject and focus is the female character, Maria Leopoldina of Austria (Q84239), who is also represented in a different color.

It's important to differentiate between the 'marked as prominent' feature, in the depicts (P180) section, and the main subject (P921), which is also used by MediaSearch to rank media files that will be displayed first in searches on Commons. Sometimes, both properties might refer to the same element, as Mona Lisa, the person depicted in Mona Lisa (Q11879536), is the main subject on the Mona Lisa (Q12418), the painting, and the most prominent element depicted on the painting. On occasions, they might differ, like in the Sessão do Conselho de Estado (Q43485263) painting, in which the main element is the woman, Maria Leopoldina of Austria (Q84239), but the main subject is the Independence of Brazil (Q1548600).

As a feature, ‘mark as prominent’ enhances the accessibility of media files for people with visual disabilities, as it's a structured way to differentiate between elements displayed in an image, especially considering that not all media files on Wikimedia Commons have a Wikidata item (or a notable enough to have one) to be described on a structured and multilingual way over that platform.

‘Mark as prominent’ is used in the edit interface on the structure data tab for each file and in some tools, like the ISA tool. It can also be added through bots, but it's not available in other upload tools, such as Pattypan or OpenRefine.

If a file depicts a work of art for which we have an item on Wikidata, we can link to it. Regardless of the type of work (2D or 3D) or how prominent it is in the image (from somewhere hiding in a corner to exact reproduction of a 2D work), we'll always add the depicts (P180) statement to the item on Wikidata. Depending on the type of artwork and how it's depicted, more statements might be added. This gives a scale from almost minimal inclusion (de minimis) to exact reproduction (not an original work).

If the main subject of an image is a work of art for which we have an item on Wikidata, main subject (P921) is used (together with the same depicts (P180) statement). This can be used for any type of visual artwork. If the file uses {{Artwork}} (or one of the related template) than the information from Wikidata about the work of art will be shown.

Digital representation of work of art[edit]

If the image is a digital representation of a two-dimensional visual artwork and an item for the artwork exists, digital representation of (P6243) is used (together with the same depicts (P180) and main subject (P921) statement). Only do this in cases where the principles of PD-art or PD-scan apply. In other cases main subject (P921) should be used. If the file uses {{Artwork}} (or one of the related template) than the information from Wikidata about the work of art will be shown.

Any statements in the structured data of the file that apply to the work of art (and not to the file) should be moved to the item on Wikidata.

The use of the applies to part (P518) qualifier could help improve ranking, but those qualifiers are currently rarely used at all on Commons, though they have precedent on Wikidata. For example, on the Wikidata item for Mona Lisa, the depicted elements have 'applies to part' qualifiers that specify foreground or background, which could provide additional signals to the search ranking algorithm if used on Commons.

Qualifiers provide context for depicts, making it more specific and helping readers or machines to know which subject on the media file that specific depicts statement is referring to.

While the feature doesn't yet influence search ranking, it's possible to search a qualifier on MediaSearch using the haswbstatement search. To find every file that depicts a black cat, the data should have a depicts statement for house cat (Q146) and a qualifier of color color (P462) with the Wikidata item for black (Q23445).

Some relevant qualifiers allowed for depicts[edit]

To know which values can be used as qualifiers without generating a warning, see the section 'allowed qualifiers constraint' within the depicts (P180) property.

A list of files that serve of examples of best practices on how to model various situations.