Commons:Wiki Loves Monuments 2016/Who's who

Wiki Loves Monuments — just like all projects of the Wikimedia movement — is almost entirely run by volunteers. Its success has been achieved thanks to the involvement of hundreds of participants interested in preserving cultural heritage of their countries and building the biggest free media repository in the world.

This is an overview of the volunteers involved as well as of their responsibilities for the 2016 edition; for each person, there will be also information on how to reach them, although we recommend that you review the Need help? section before contacting individual team members.

Lokal_Profil / André Costa (WMSE) is a Wikimedian and an employee of Wikimedia Sverige. He is a co-maintainer of the Monuments database and its API, as well as ErfgoedBot − key-parts of the tech infrastructure underpinning Wiki Loves Monuments. Do not hesitate to add him to tasks on Phabricator, or to leave him a message, for anything related to the database, ErfgoedBot or the inclusion of new data in these. André is also working on migrating the WLM data to Wikidata, so get in touch if you have thoughts/an interest in this.

Erik Zachte will publish metrics after the event ended. Both on number of participants, and on number of uploaded images. Each of these by country, and in comparison with earlier years, and more. See e.g. [1] [2] Erik is volunteer, but also works part-time for WMF as data analyst. You can reach him at his talk page or at ezachte

Alleycat80 is a Wikimedian, and an Audit Committe and Board Member for Wikimedia Israel in the last 4 years. Ido will assume the role of partner communications, in the hope of creating an alliance of like-minded organizations to sponsor and support WLM this year. Ido can be reached at ido

wikimedia.org.il or on his talk page.

In the other side of his life he is an IT specialist certified in project management and IT security and quality.

You can reach him on his talk page, via email at ilario.valdelli

Ilya is the developer of WLX Jury tool and will provide support for it. You can reach him at his talk page or at intracer

gmail.com. He has been a contributor to Wikimedia projects since 2005 and started to be administrator of the Ukrainian version the same year; He is active member of Wikimedia Ukraine since 2012 and has been involved with organizing Wiki Loves Monuments and Wiki Loves Earth competition on local level since 2013 and on international level since 2014.

Jean-Fred is a Wikimedian from France, and has been part of the organization of WLM in that country since 2011. Since 2015, he is co-maintainer of the Monuments database and its API, as well as ErfgoedBot − key-parts of the tech infrastructure underpinning Wiki Loves Monuments. This year again, he will work on making sure they are working as expected during the contest. Do not hesitate to file bugs on Phabricator, or to leave him a message for anything related to these.

Lily organized Wiki Loves Monuments in Iran in 2015. This year, Lily is responsible for the coordination efforts to make sure that the international team stays on top of the work needed for this year's Wiki Loves Monuments. You can reach Lily on this talk page or via email, for communications that need to stay private, at lilyofthewest.wikimedia

Romaine has been a contributor to Wikimedia projects since 2003; over the years helping out as administrator of several wikis, GLAM volunteer for Wikimedia Nederland, founder of & GLAM volunteer for Wikimedia Belgium, publisher of the Wikimedia newsletter This Month in GLAM. He's often fixing template problems, active with bots, and is since 2010 involved with the organization of Wiki Loves Monuments. For this photo contest he mostly does on-wiki technical support with templates and the upload wizard, translations, and the CentralNotice banner. In 2011, 2012, 2013 and 2014 he organized the photo contest in Belgium and Luxembourg.

In 2016, Romaine will be responsible for the campaigns and upload wizards, translations of those pages, navigational structure of the Commons:Wiki Loves Monuments pages, categories for the contest, and supporting the contest in general. If you have any questions related to these subjects, feel free to ask!

You can reach him on his talk page, via email at Romaine.wiki

gmail.com or on the IRC channel #wikilovesmonuments on Freenode. If it concerns the campaigns and upload wizards it is preferable you use the talk page of the upload campaigns. The quickest response you will get by IRC, secondary via the talk page. Try to use e-mail as little as possible because of the too many e-mails send in the last days of August. 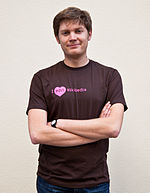 Stephen (User:Slaporte) is a Wikipedian in California. In 2016, he joined Wiki Loves Monuments to work on Montage (source) a photo evaluation tool for Wiki Loves-style photo competitions. You can reach Stephen at stephen.laporte

Wikipedian since 2005, from Poland. In 2016, he joined international team to work on front-end part of Montage. Contact: pawel.marynowski

The table below is intended as a guideline to point you to the best direction for getting answers to your questions.