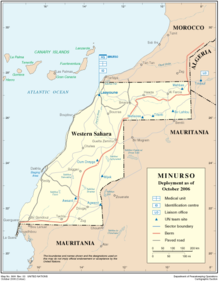 The Sahrawi Arab Democratic Republic (SADR) was proclaimed by the Polisario Front on 27 February 1976. The SADR government controls a strip of land in the east of the country, separated by a berm from the larger area to the west that is controlled by Morocco, which claims it as its Southern Provinces. The Sahrawi Republic maintains diplomatic relations with 41 states of the United Nations, as well as a post-Soviet non-UN member South Ossetia, and is a full member of the African Union.

Neither Western Sahara nor the Sahrawi Arab Democratic Republic appear in the list of countries with which the United States has copyright relations.[2] The de facto position would appear to be that Moroccan copyright law applies to works from Western Sahara, or at least to works created west of the berm.

Caution: The above description may be inaccurate, incomplete and/or out of date, so must be treated with caution. Before you upload a file to Wikimedia Commons you should ensure it may be used freely. See also: Commons:General disclaimer
Retrieved from "https://commons.wikimedia.org/w/index.php?title=Commons:Copyright_rules_by_territory/Western_Sahara&oldid=670362583"
Categories: