The Union of South Africa was created on 31 May 1910 as a semi-independent polity under the British crown. It became fully independent on 11 December 1931.

South Africa has been a member of the Berne Convention since 3 October 1928 and the World Trade Organization since 1 January 1995.[1]

As of 2018 the World Intellectual Property Organization (WIPO), an agency of the United Nations, listed the Copyright Act, 1978 (Act No. 98 of 1978, as amended up to Copyright Amendment Act 2002) as the main copyright law enacted by the legislature of South Africa.[1] WIPO holds the text of this law in their WIPO Lex database.[2]

This was amended by the Intellectual Property Laws Amendment Act 2013 (Act No. 28 of 2013) to provide for the recognition and protection of indigenous works.[3] 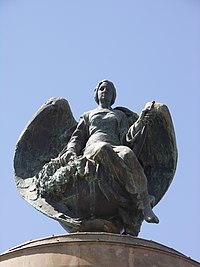 Works in which no copyright subsists

Not OK The Copyright Act 1978 of South Africa (as at 18 June 2002), section 15(3), states: "The copyright in an artistic work shall not be infringed by its reproduction or inclusion in a cinematograph film or a television broadcast or transmission in a diffusion service, if such work is permanently situated in a street, square or a similar public place."

Since section 15(3) does not mention photographs, there is no freedom of panorama exemption in South Africa that would permit photographs of artistic works to be taken without infringing the copyright in the works.

See Freedom of Panorama ZA and meta:Wikimedia South Africa/Copyright Amendement Bill for updates on the efforts by South African Wikimedians to have freedom of panorama introduced in the country.

South African stamps older than 50 years (published before 1 January 1972) are in the public domain, use {{PD-SAGov}}

Caution: The above description may be inaccurate, incomplete and/or out of date, so must be treated with caution. Before you upload a file to Wikimedia Commons you should ensure it may be used freely. See also: Commons:General disclaimer
Retrieved from "https://commons.wikimedia.org/w/index.php?title=Commons:Copyright_rules_by_territory/South_Africa&oldid=619903955"
Categories: