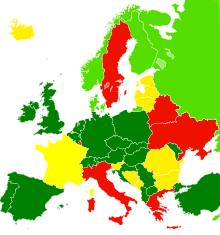 Current scope of freedom of panorama in the countries of Europe.
The current report text would turn the map red or yellow for all EU countries.
OK, including works of art
OK for buildings only
Not OK, for non-commercial use only
Not OK
Unknown

We have until Thursday 9th July to convince MEPs (Member of the European Parliament) to stop or amend the following text, that the European Parliament is considering in a report of the Commission of Juridical Subjects on the implementation of the Directive 2001/29/EC on author's rights in the society of the information:

16. Considers that the commercial use of photographs, video footage or other images of works which are permanently located in physical public places should always be subject to prior authorisation from the authors or any proxy acting for them;

There are two ways to stop this text becoming part of the adopted European Parliament report:

Either way, we need to find 75-76 MEPs (10% of the house) until 1 July to sign up to an amendment proposal so it can be voted on in plenary.

Today 9 July, the European Parliament voted about the copyright report, including the subject Freedom of Panorama.

Thanks everyone, we almost manage to achieve a full swing, which is a very tough feat to get done in 3 weeks.

This page, talkpage and associated sub-pages are a space to try to put together a campaign to do that.

For a full list, see Freedom of Panorama 2015 on Wikidata.

Discussion and proposals on /Proposed messages.

Photos of modern buildings must remain on Wikipedia

A proposal in the European Parliament brings thousands of images on Wikipedia in danger.
More information

Photos of modern buildings must remain on Wikipedia

A proposal in the European Parliament brings thousands of images on Wikipedia in danger.
More information

The title must be something that the readers easily understand and all would agree with. For the moment, the best I can come up with is: "Photos of modern buildings must remain on Wikipedia". The line below should explain what is going on. First suggestion: "A proposal in the European Parliament brings thousands of images on Wikipedia in danger." Please give suggestions for improvements! Romaine (talk) 04:18, 21 June 2015 (UTC)

Discussion and proposals on /Proposed messages.

I have moved the following idea to its own subsection.--Piotr Konieczny aka Prokonsul Piotrus Talk 02:01, 22 June 2015 (UTC)

How about we create copypastable tweets at /Twitter campaign, and list relevant hashes, including those for MEPs? --Piotr Konieczny aka Prokonsul Piotrus Talk 02:01, 22 June 2015 (UTC)

How about we draft and translate emails about this issue, so others can just copypaste them rather than invent their own? --Piotr Konieczny aka Prokonsul Piotrus Talk 02:01, 22 June 2015 (UTC)

I have translated and adapted the catalan letter at /Email campaign in spanish, there is an english translation too, but it needs a review. Please, review the text to get a final document to send to the communities. Bye, --Elisardojm (talk) 00:49, 25 June 2015 (UTC)

Urgent! Please do not ask the users/public to send the same message, MEPs notice that and then they do not work any more. Please point users who want to write an MEP to this page for instructions: Commons:Freedom of Panorama 2015/Mail your MEP. Romaine (talk) 01:14, 25 June 2015 (UTC)

How about we try to make it easy for people to find their MEPs contact information? Also, we should create a list of important MEPs. What I mean by important - those that are in the right commissions, etc. I was reading some related forums (in Polish) and some people say that some MEPs are much more important to contact then others. Any comments on that appreciated. --Piotr Konieczny aka Prokonsul Piotrus Talk 02:01, 22 June 2015 (UTC)

The Singpost piece mentioned that

for maximum impact please contact each of your local MEPs and ask them to communicate your concern to the MEP responsible for co-ordinating their group position on the matter—in the UK, for example, this would be Sajjad Karim (on-side?) for the Conservatives, or Mary Honeyball (wobbly?) for Labour

Go to m:Freedom of Panorama in Europe in 2015/Contact your MEP to easily Tweet or find the e-mail address.

I think we should create leaflets with stories, like the one at Commons_talk:Freedom_of_Panorama_2015/Proposed_messages#Idea. And I think we should link all materials per country at at Commons:Freedom_of_Panorama_2015/Proposed_messages#Resources_for_localized_banners_and_messages to keep it in one place. --Piotr Konieczny aka Prokonsul Piotrus Talk 03:54, 23 June 2015 (UTC)

E-mails should not be copied, that does not work. It is better if everyone writes a personal mail. Advice on what you can add to a page can be found at Commons:Freedom of Panorama 2015/Mail your MEP. Romaine (talk) 19:06, 27 June 2015 (UTC)

Donation to Wikipedia, from Werner Huth

Please sign up below if you want to be involved or can do anything to help; and also add anything you have done, are doing, or are about to do, so we can all inspire each other.

Update: I got a response for MEP D.Papadimoulis that he will get informed about the issue and I send additional links to him. Today also I send hard copies (about 15) to all Greek and Cyprian MEP's on Euro-Parliament (the selection includes all the political parties that are represented there). I will start the email campaign next week, as we have time for that. A public letter is a very good idea and I will try to involve in that the el.wp community the next days. Cheers!!!--Γλαύκος shoot it 18:04, 26 June 2015 (UTC)

Please add your name if you can help set up websites, co-ordinate material, or can and want to participate in any other way