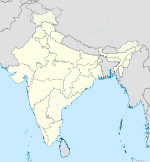 The Andaman and Nicobar Islands (Bengali: আন্দামান ও নিকোবর দ্বীপপুঞ্জ; Tamil: அந்தமான் நிக்கோபார் தீவுகள், Hindi: अंडमान और निकोबार द्वीपसमूह) are a group of islands and a Union Territory of India. The territory is located in the Indian Ocean, and geographically is considered part of Southeast Asia. It comprises two island groups, the Andaman Islands and the Nicobar Islands, separated by the 10° N parallel, with the Andamans to the north and the Nicobars to the south. The Andaman Sea lies to the east and the Bay of Bengal to the west. The territory's capital is the Andamanese town of Port Blair. The territory's population was 356,152 (as of 2001). Added together, the total land area of the territory is approximately 6,496 km² or 2,508 sq mi. The indigenous people of the Nicobars (unrelated to the Andamanese) have a similarly isolated and lengthy association with the islands going back 30,000 to 60,000 years.