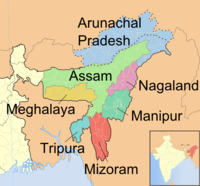 Manipur (Meitei: ꯃꯅꯤꯄꯨꯔ maṇipur) is a state in North-East India Region which was merged with India in 1949 and given status of union territory in 1950 and granted statehood in 1972 with the city of Imphal as its capital. Manipur had a constitution in 1947. Manipur is bounded by the Indian states of Nagaland to the north, Mizoram to the south and Assam to the west; it also borders Myanmar to the east. It covers an area of 22,347 square kilometres (8,628 sq mi). The Meiteis (Meeteis), who live primarily in the state's valley region, form the primary ethnic group. Foreigners entering Manipur (including foreign citizens born in Manipur) must possess a Restricted Area Permit, which can be obtained from the Foreigners' Regional Registration Office in the "metros" (Delhi, Mumbai, Kolkata, Chennai) or certain other state government offices. Permits are valid for only 10 days, and visitors must travel only on tours arranged by authorised travel agents, in groups of four. Furthermore, they may come to Imphal only by air and are not permitted to travel outside the capital. 24°49′1.2″N 93°57′0″E﻿ / ﻿24.817°N 93.95°E﻿ / 24.817; 93.95

This category has the following 17 subcategories, out of 17 total.

The following 12 files are in this category, out of 12 total.