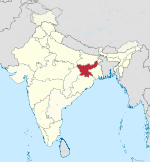 Jharkhand (Hindi: झारखंड}}, [IPA: ˈdʒʱaːrkʰəɳɖ) is a state in eastern India. It was carved out of the southern part of Bihar state on November 15, 2000. Jharkhand shares its border with the states of Bihar to the north, Uttar Pradesh and Chhattisgarh to the west, Orissa to the south, and West Bengal to the east. An area of 28,833 sq mi (74,677 km²). The industrial city of Ranchi is its capital. The name "Jharkhand" comes from the Sanskrit word Jharikhanda, which is the ancient name of the region's dense forest.

The following 12 files are in this category, out of 12 total.