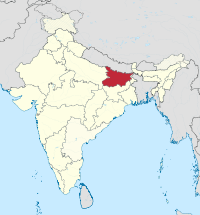 Bihar (Hindi: बिहार, Urdu: بہار) is a state in eastern India. Bihar is the 12th largest state in terms of geographical size at 38,202 sq mi (99,200 km²), and 3rd largest by population. Close to 85 percent of the population lives in the rural countryside. Almost 58 per cent of Biharis are below the age of 25. Bihar lies mid-way between the humid West Bengal in the east and the sub humid Uttar Pradesh in the west. It is bounded by the country of Nepal to the north and by Jharkhand to the south. The Bihar plain is divided into two unequal halves by the river Ganga which flows through the middle from west to east. Bihar has notified forest area of 6,764.14 km², which is 7.1 per cent of its geographical area. Nalanda was a centre of learning established by the 5th century BC in Bihar, India.

This category has the following 18 subcategories, out of 18 total.