From Wikimedia Commons, the free media repository
Jump to navigation Jump to search
Shortcut
COM:MOP
This project page in other languages:

Wikimedia Commons is a project of the Wikimedia Foundation. 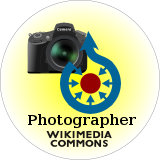 Logo intended for display on a Wikimedia Commons photographer.

Like the other projects of the Wikimedia Foundation, Wikimedia Commons is entirely created by volunteers. It succeeds because people all around the world recognise the benefits of using open content licenses to make their work freely available to others.

Our volunteers have varying skills and abilities. This page showcases a selection of the highly skilled photographers who choose to use open content licenses and donate their work to the Wikimedia Commons. Each photographer on this page has contributed at least 10 of our Featured Pictures.

I am Jeevan Jose from Kadavoor, Kerala, India. I take photos of plants and bugs; would like to contribute best of them here. Active in other projects like WikiProject Nature and conservation in India, WikiProject Tree of Life, WikiProject Plants and WikiProject Insects in Wikipedia, Malayalam Wikipedia, Wikispecies and Meta-Wiki. Works together with other similar minded people in India to attract more citizen scientists and photographers to Wikimedia. Fortunate enough to be part of the team when Wikipedia was formally presented with the highly esteemed Princess of Asturias Award for International Cooperation, honoring the Wikimedia movement vision of allowing everyone, everywhere to freely share in the sum of all knowledge. Also available at projects like Facebook, Flickr, EOL, Project Noah, India Biodiversity Portal and DiversityIndia.

Uploaded 2,120 images which includes 101 Featured Pictures, 515 Quality Images, 24 Valued Images. Among them, 126 works has been published / re-used outside Wikimedia projects. Created these galleries for those interested to learn and self identify their works: Butterflies of Kerala, Odonata of Kerala, Amphibians of Kerala, Reptiles of Kerala, Birds of Kerala and Mammals of Kerala.